While there are a number of classics that everyone digs, we all have our own guilty pleasures – movies that might not have cut ice with many, but ones you can watch with immense enjoyment even if for the hundred and fifteenth time! The movies below are not necessarily my all-time favorite movies. These are simply movies that were either heavily panned by critics or majorly rejected by audiences or both and yet ones I watched again…and again…and again! There are (much) better movies out there and definitely ones that I enjoy more, but these are my guilty pleasures. So, presenting, in no particular order…. 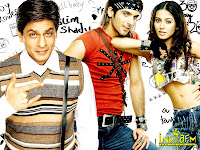 Classic masala movie! Absolutely loved the references to and digs at old and new movies alike! Farah Khan cooked up a snazzy story of long-lost half-brothers, appropriately called Ram and Laxman, with a Raa(gha)van lurking around trying to stop an Indo-Pak friendship gesture for personal vendetta! A remarkably spoofy script, deliberate corny dialogues, foot-tapping tunes by Anu Malik and a lovable larger-than-life turn by SRK made it one of those few movies that I have seen multiple times on the big screen! The movie did pretty well at the box office but was somehow not loved as much as it deserved to be!

Forgot to mention how much I L-O-V-E Suneil “hamming” Shetty in this one! “May-jjja…..I thot u were the vary bast” 😀 Oooh, gotta go watch that scene again 😀 Meanwhile, I’ll leave you with one of the best qawwalis of recent times! 🙂 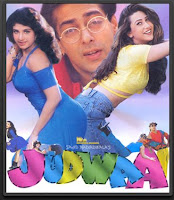 One of the most senseless comedies ever, made not just bearable but stupendously enjoyable, largely because of the charisma of the oh-so-charming Salman Khan! He looked sweet back then, in the non-beefed up look, doing the puerile stuff like only he can…also back then, it hadnt gotten that repetitive and irritating! :D. The comedy was situational and could have been pretty banal, but for the way Salman and Karishma delivered the most ludicrous lines, making them seem inherently funny! Also, who can forget the bickering inspector-constable duo played by Anupam Kher and Satish Shah! Sparkling stuff! Anu Malik came up with a truly wacky score that still gives me goosebumps every time I hear lines like “Tu meri hai Pepsi-Cola, main tera hoon Coca-Cola” and “Oonchi hai bulding, lift teri band hai” – truly “classic”! 😀 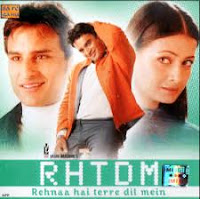 Hands down the best first 15 mins of any college movie ever made! Such style, such conflict, near-perfect portrayal of Engineering college campus rivalry and above all, uber-cool Maddy! Rest of the movie is pretty good too although the climax is tepid. Maddy’s love story is ultra-sweet. Music by Harris Jayraj is simply awesome. The pretty Diya Mirza, crack-up-till-you-pee dialogues, an ultra-cocky Hirjee and ultra-sweet Maddy – this ones truly a guilty pleasure. The movie flopped big time on release but has gained a cult following ever since. 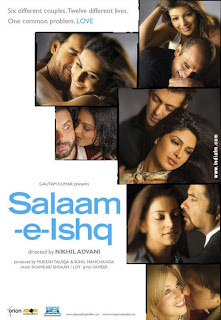 Heavily panned by critics and rejected by most, and yet, I love this movie. Its lengthy yes, and tends to drag after the 2-hour mark, but all the stories are so beautiful, I was willing to sit through it, thrice! I especially enjoy the Govinda-Shannon story and Akshay-Ayesha one. John-Vidya story is probably the best and the most crucial, and it succeeds in making an impact except for the ridiculous Pakistan market scene broadcast live! That’s a major WTF moment, but considering its a 3.5 hr long film, its a minor abberation. Salman-Priyanka story had the most potential, being a spoof on the industry and media but somehow fizzles out due to a lukewarm follow-up after a rollicking start. Anil-Juhi-Anjana story is good although a tad too long, while the Sohail-Isha track is howlarious! SEL’s music is rocking and some stellar performances carry the movie through to the campy climax which ties all ends together remarkably well, while just managing to not go over-the-top! Nikhil Advani made a noteworthy follow-up to Kal Ho Naa Ho, altho he ripped off a lil bit of Love Actually! But he also managed to make a good film, actually! 😀 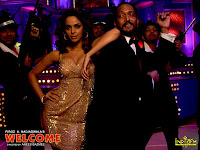 This one’s Nana Patekar all the way! Uday Shetty (6:35 onwards) sets straight everything else that’s wrong with this film – from Akshay Kumar’s pathetic role to some of the hideously tapori dialogues to cringe-worthy romantic scenes – with his spontaneous comedy, delivered in a manner only he can! Anil Kapoor plays a great supporting role and altho he did splendidly in No Entry, here he has to play second fiddle to Nana who is in his element after a long time! Mallika Sherawat delights in a sprightly cameo! Despite the crappy finale, the movie stands on its own due to stellar performances by Nana and Anil! 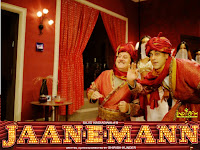 This is probably the most innovative college campus story told in Bollywood (Sorry team Kuch Kuch Hota Hai!) Shirish Kunder makes a rocking debut as director and gives us this Broadway-esque saga of love and friendship. Great performances by (surprise, surprise!) Salman Khan and Akshay Kumar and wonderful melodies by Anu Malik along with the unique story telling style make this a memorable movie! I still cant get why the movie didnt make enough money! It was released during Diwali, most of the people who watched it liked it, critics praised it for the new story-telling techniques used and yet the movie ended up an average grosser! 😐 The competition from Don probably killed its prospects big time! Beautiful movie nevertheless! One of my favorite Salman movies 🙂 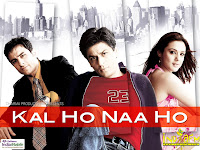 A straight-faced guide to living your life to the fullest no matter what! Kal Ho Naa Ho is probably my favorite SRK movie – I loved him in those tending to larger-than-life and yet human roles. Kal Ho Naa Ho is a true gem, and I have had endless debates with friends about this. What draws me to it every single time I watch it, is the spontaneous and intelligent humor, which doesnt wait for the audience to laugh along but moves on at a brisk pace, and the subtle, underlying message of living your life to the fullest without complaining about what’s missing, indeed making the most of what you have. Saif and Preity turned in one of their top performances for this one. And although the ending is labored, the impact isnt diluted one bit, at least for me. I am so glad Karan Johar let Nikhil Advani direct this one! 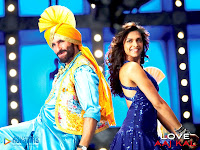 A true ode to love, as seen by our generation and the one before ours. Love Aaj Kal was somehow disliked by many, inspite of making truckloads of money, mostly because people found it fake and pretentious…and boring. And somehow, I found it honest, relatable and very touching! A good example of  “to each his own” I guess 🙂 What worked most for me in Love Aaj Kal was the fact that it captures the thoughts of today’s youth very well – couples do break up because they dont believe in making long-distance work, couples do try to ensure smooth, hassle-free break-ups and couples do continue to be in love after break-ups if the reason for break-up in the first place was frivolous. Of course, there are tons of examples that point otherwise. The music by Pritam is super, Saif turns in a spirited performance in a smart double role, ably supported by the delightful Rishi Kapoor, and contrary to popular belief, Deepika does her job decently as well, seeming spontaneous and confused, just as the character demanded. The comparison between love of yore and love today is fabulous and the dialogue between the older Veer and younger Jai is superbly written and delivered. One film I can always turn to when I need to wake up the practical romantic in me 🙂

This one’s a riot all the way – superfast, superzany and choc-a-bloc with unconventional comic moments and enough twists to put Race to shame! Abhay Deol is dependable as always in the role of Nilya. Multiple bits and parts players do brilliant jobs – most notably the actors in the roles of Mac, Inspector, hawaldar Tawde and the newly inducted, Rajni-fan constable. Snehal Dabi and Deepak Shirke turn in hilarious extended cameos, while the cleavage-toting Neha Dhupia does surprisingly well too! The movie is a start-to-end caper and, aside from the blatant rip-off scene from Pulp Fiction, everything works perfectly. Sadly, the movie did not do well when released, prime reasons being it wasnt marketed enough and, well, sadly, not everyone makes a beeline at the theater to watch an Abhay Deol starrer. 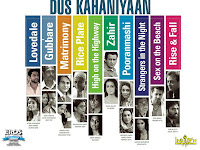 One of the better anthology films made in Bollywood, Dus Kahaniyaan has a few very well made stories along with some mediocre ones and a couple boring/ridiculous ones. The best of the lot are undoubtedly Gubbare starring Nana Patekar – simple, touching and non self-indulgent – and Zahir starring Manoj Vajpayee and Dia Mirza – dark, visceral and ending with a poetic justice. Pooranmasi starring Amrita Singh and Minisha Lamba is really good too. Rice Plate, enacted by stalwarts Naseeruddin Shah and Shabana Azmi, is interesting, but also a blatant rip-off of an American short film. Matrimony starring Mandira Bedi and Arbaaz Khan is very Jeffrey Archer-ish – short, meaty and with a shocking end. High on the Highway starring Jimmy Shergill and Masumi Makhija talks about the self-indulgence of youth but ends up being too self-indulgent in the way it is presented. Neha Dhupia and Mahesh Manjrekar’s Stranger in the Dark starts out as an interesting concept but ends up being a damp squib because of the manipulative end. Sanjay Dutt and Suneil Shetty’s grand finale Rise and Fall is a predictable story shot with style and although it doesnt work completely, its not too bad either. Aftab and Anupam Kher’s corny and boring Lovedale and Dino Morea’s trying-too-hard-to-be-cool-and-hot Sex on the Beach vie for the bottom honors and while Sex on the Beach at least has a hot chick in skimpy clothes throughout, which is scant respite btw, Lovedale fails to engage at all.

Like I said, not all of them work, but the ones that work, work really well. Ultimately, its like reading one of Archer’s short stories compilation – you like some, you ignore some. The movie works pretty well in terms of style and content and should have made more money than it did. 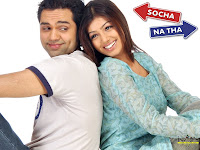 Its fitting to end the list with Socha Na Tha, Imtiaz Ali’s delicious debut about innocent love and arranged marriages. Abhay Deol and Ayesha Takia manage to take your breath away with lovable performances and everyone else chips in to make Socha Na Tha a believable, relatable tale of confused marriageable minds and how things unfurl with time and situation. Ably supported by some lilting music, which includes Socha Na Tha and O Yaara Rab, and some simple dialogues, this one’s an absolute delight for true romantics at heart and one of the best movies to come out of Bollywood in the rom-com genre.

There are lot of movies that I enjoy more and tend to watch multiple times but then so do many others and discussing those movies would have been pretty moot. To give an example, I really doubt readers would be interested in me raving about Andaz Apna Apna or Dil Chahta Hai or Rang De Basanti or even Jab We Met, coz they are justified classics and there’s no dearth of good stuff on these movies. Like I mentioned before, these are not mere pleasures, these are guilty pleasures – movies I know are flawed in some way or the other, and yet, movies I cant resist enjoying. You know, like that huge piece of delicious mithai, that you know will reduce your life by a couple of days right away, but one you cant resist letting melt away in the mouth. 🙂

Note : This post first appeared on my blog in 2011 and has been suitably modified for reproduction here. It also won a consolation prize in the Reel-life Bloggers contest by wogma and reviewgang.