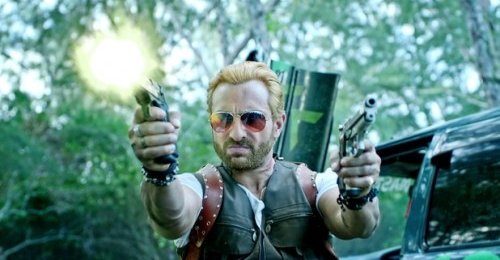 Go Goa Gone has been advertised as India’s first zom-com, or a comedy about zombies. The film, starring Kunal Khemu, Vir Das, and Anand Tiwari as three best friends stranded on an island infested with flesh-eating zombies, works like magic when directors Krishna DK and Raj Nidimoru focus on their three leads and the irreverent banter between them. But, working off a slim plot, the filmmakers don’t really know where to take the story after a point, and end up turning the film’s entire second half into a lazy cat-and-mouse chase between man and monster.

Channeling an unfiltered, sexually charged humor reminiscent of Delhi Belly, the film introduces us to permanently stoned Hardik (Khemu) and Luv (Das), who never leave their couch unless they absolutely have to. Stuck in jobs they have no interest in, their love and sex lives going nowhere, the two fellas decide to tag along when their straight-arrow roommate, Bunny (Tiwari), heads to Goa on a work assignment.

The morning after a rave at a nearby island, an exclusive Russian drug that our heroes were too broke to buy has turned most partygoers into the walking dead. Along with a pretty girl, Luna (Puja Gupta), who also escaped the infection, the boys scramble around the island dodging the zombies until they run into Boris (Saif Ali Khan), a bleached-blond mafioso who claims he “kills dead people”.

The jokes fly thick and fast, particularly in the early scenes that benefit from a winning cocktail of laugh-out-loud dialogue and well-timed performances by the three leads. In one terrific sequence, they’re attacked by a trio of female flesh-eaters. After bickering over who will tackle the hot one, and who must vanquish the fat one, the boys use everything from logs to umbrellas to whack, stab, and punch the daylights out of the women. Never have I laughed this hard at a sight so politically incorrect, yet so oddly funny.

Saif Ali Khan as Boris, alternating between a Dilli accent and a Russian accent, is in very good form. In a scene where he interrogates and intimidates Kunal Khemu’s character while checking for possible signs of the zombie virus, both actors shine as they play off each other. Khemu, in fact, has a rakish charm, and he plays the cocksure Hardik with a winning confidence. Vir Das as the goofy Luv, and Anand Tiwari as the earnest Bunny, hit all the right notes, seldom setting a foot out of place.

It’s a pity then the writers don’t know what to do with these characters post intermission. So they’re relentlessly pursued by swarms of zombies through forests and beaches and an abandoned home. Because these monsters inspire neither fear nor laughs, the film’s extended climax doesn’t feel merely convenient, but also wholly underwhelming.

I’m going with three out of five for Go Goa Gone. So much in this film is good, until it all goes nowhere in the end.