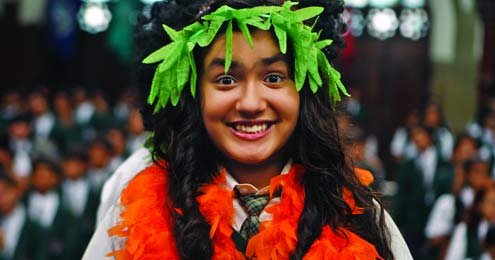 School can be a difficult place if you’re overweight, awkward, not particularly bright, or clumsy on the sports field. Gurpreet Kaur, the 14-year-old protagonist of Gippi (Riya Vij), ticks all the boxes. She’s routinely taunted by the mean girl in class, ignored by all the popular kids, and can barely squeeze into her uniform. An unlikely friendship with the school jock (Taaha Shah) ends embarrassingly for Gippi, and in a weak moment she even accepts a challenge to win the Head Girl elections.

Despite its promising premise, evocative of the quirky American comedy Napoleon Dynamite, writer-director Sonam Nair’s debut film hits rough patches because the writing is so derivative, few of the characters feel particularly original or interesting.

The key tragedy with the film is that while some of Nair’s ideas are progressive and strong, her execution seldom matches up. The film addresses puberty, menstruation and sex education, but these scenes never achieve a matter-of-fact, ‘normal’ tone. Instead Nair appears to be calling out to the viewer, demanding appreciation for her ‘mature’ choices.

It doesn’t help that the film’s misfit heroine never endears herself as an underdog worth rooting for. Sure it’s hard being a teenager but Nair bequeaths Gippi with a prickly attitude in place of angst. Instead, scattered sparkling moments come from Gippi’s solemn best friend Aanchal (Doorva Tripathi) and her podgy younger brother Booboo (Arbaaz Kadwani). Of the cast, Divya Dutta humanizes the somewhat hard-to-digest, selfless character of Gippi’s single mother who not only encourages her kids to go to their father’s second marriage, but even accompanies them and poses for pictures with her ex and his new bride.

Ultimately, this could have been a sweet, unusual tale about the triumph of a nerd, yet it’s let down by its affected tone. I’m going with two out of five for Gippi. Alas, many of the film’s better ideas are lost in execution.