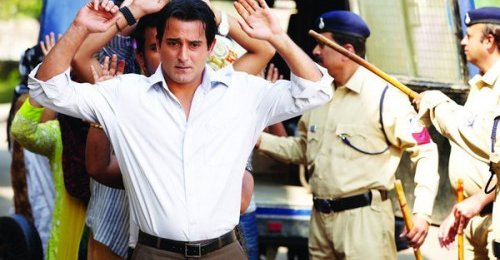 Setting up the sort of premise that’s usually treated with a much lighter hand in the popular television sitcom Office Office, the makers of Gali Gali Chor Hai construct a well-intentioned but labored tale of the common man’s vulnerability against day-to-day corruption in society.

Akshaye Khanna stars as Bhaarat, a middle-class bank cashier in Bhopal who must pay the price for refusing to allow a local political candidate to set up his campaign office in a spare room in his home. When the cops come calling to inform him that he must reclaim a table fan that was allegedly stolen from his home, Bhaarat finds himself sucked into a whirlpool of bureaucracy and bribes.

There are some laughs to be had as Bhaarat navigates his way through the judicial system by greasing the palms of everyone involved…from the police and the lawyers, to witnesses, and the thief too. All this for a fan that didn’t belong to him in the first place. There are some light moments also in his repeated attempts to rid himself of the fan in the film’s second half.

Gali Gali Chor Hai doesn’t say much that hasn’t been said before, and it doesn’t say it interestingly either. Never smart enough to be described as a satire, it fails ultimately because it’s dreadfully dull.

I’m going with two out of five for director Rumi Jaffrey’s Gali Gali Chor Hai. Even a sleazy item song by Pakistani starlet Veena Malik is unlikely to shake you out of your slumber.