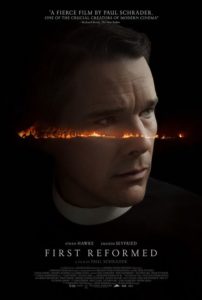 Reverend Ernst Toller (Ethan Hawke) is a solitary, middle-aged parish pastor at a small Dutch Reform church in upstate New York on the cusp of celebrating its 250th anniversary. Once a stop on the Underground Railroad, the church is now a tourist attraction catering to a dwindling congregation, eclipsed by its nearby parent church, Abundant Life, with its state-of-the-art facilities and 5,000-strong flock. When a pregnant parishioner (Amanda Seyfried) asks Reverend Toller to counsel her husband, a radical environmentalist, the clergyman finds himself plunged into his own tormented past, and equally despairing future, until he finds redemption in an act of grandiose violence. From writer-director Paul Schrader (Taxi Driver; American Gigolo; Affliction) comes a gripping thriller about a crisis of faith that is at once personal, political, and planetary.

The movie tries to bring up an important issue that the Church should be pro environment and speak out about climate change and what’s happening to the world but the execution is so horrible. There is an amateurish ham handed scene where Mary and the Reverend are on top of each other and levitate with the background of what’s happening to the world because of climate change. The final scene is so ridiculous.

Screenplay and direction by Paul Schrader is horrible. The movie was nominated for an Oscar for Best Original Screenplay. This horrible screenplay should not have been nominated for an Oscar. The movie is so boring and pretentious. Its like Paul decided that I will make a movie about climate change but he had no idea how to go about it. First Reformed is a confused, convoluted mess.