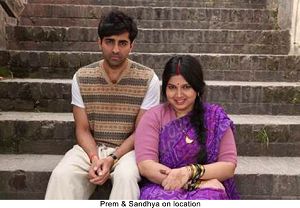 Maneesh Sharma’s first independent production venture under the Yash Raj Films banner, DUM LAGA KE HAISHA, is directed by Sharat Katariya and stars the extremely talented Ayushmann Khurrana and YRF’s new find from one of its own – debutant Bhumi Pednekar.

On the perfect casting of Bhumi, Maneesh Sharma who has a winning streak of working with successful debutants Ranveer Singh, Anushka Sharma, Parineeti Chopra and Vaani Kapoor says, “For the films I have directed, Bhumi has been working closely in the casting process as an integral part of YRF’s Casting Division and many a times doubled as an actor to conduct auditions with the prospective talent. In the process I saw her enacting various roles and it was obvious what a brilliant talent she is!”

DUM LAGA KE HAISHA revolves around the life of a small town couple – Prem and Sandhya. From overcoming his fear of the English language to dealing with an overbearing father, Prem (Ayushmann Khurrana) discovers that his oversized and mismatched wife, Sandhya (Bhumi Pednekar), who he thought was a spanner in his business and life, will actually lead him to something quite cool.

DUM LAGA KE HAISHA is currently under production and is slated for a 2014 release.