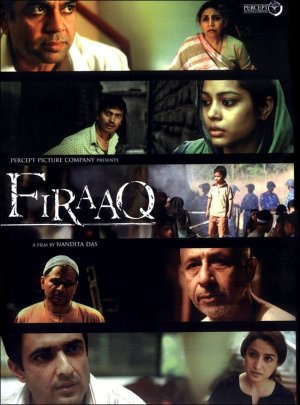 Firaaq is the story of ordinary people, some victims, some silent observers and some perpetrators one month after the 2002 violence in Gujarat. Firaaq is based on some of the stories from Rakesh Sharma’s The Final Solution. The little kid’s story, Muneera’s money getting burnt as well the saint’s tomb being vandalized are all taken from the interviews of ‘The Final Solution’. Whereas The Final Solution (though very critical of the government) interviewed an innocent Hindu family who lost a member in the train burning at Godhra, Firaaq does not have any innocent Hindu victim and this makes the movie somewhat one sided.

Mohsin, a young Muslim boy, has been orphaned during the carnage and is searching for his father. Khan Sahab (Naseeruddin Shah), an elderly Muslim classical singer, loses hope when a saint’s tomb is vandalized. Aarti (Deepti Naval), a middle aged Hindu woman is traumatized as she did not help a Muslim woman being chased by a mob. Her husband (Paresh Rawal) is trying to cover up his brother’s involvement in a gangrape. Muneera (Shahana Goswami), a young Muslim woman, whose house has been burnt, suspects her friend Jyothi’s (Amruta Subhash) husband’s involvement. Muneera’s husband and a couple of his friends are searching for a gun in order to seek revenge. Sameer (Sanjay Suri) and Anu (Tisca Chopra), a Hindu-Muslim couple feel unsafe and want to move to Delhi as their store was robbed during the carnage.

The little kid in the documentary ‘The Final Solution’ says that he wants to take revenge but here Nandita Das avoids that bit. She also totally avoids showing riots or any party’s involvement unlike Rakesh Omprakash Mehra who does not leave any doubts as to which party he is talking in both Rang De Basanthi and Delhi-6. The best story of all is definitely Muneera and her friend’s story and Mohsin’s story does touch your heartstrings. The Khan Sahab’s story is a little boring and somewhat meandering. The Aarti story is ok and it becomes a feminist statement instead of a communal harmony statement. The Sameer-Anu track becomes somewhat elitist with all the english dialogues thrown in. Surprisingly the Hindu partner of Sameer is pretty cool after their shop has been robbed.

Shahana Goswami is excellent as the suspicious woman and Amruta Subhash is excellent as the woman who is feeling guilty as her friend’s house was burnt. The little kid who plays Mohsin is cute and acts well too. Naseer, Paresh Rawal, Raghuvir Yadav are good as always. Deepti Naval is good too. Sanjay Suri and Tisca Chopra are ok.

The movie is grim, heart wrenching and thought-provoking. The Mohsin track is kept open ended and the revenge seeker track is somewhat tragic as expected whereas the other tracks close out on hope. Most of the movie is shot at night and the cinematography by Ravi K Chandran is very good. The direction by Nandita Das is good. There is not a single moment of respite. She should have included atleast one story where there is a Hindu victim, which would have made the movie more balanced instead of being dismissed by some as a propaganda movie. Firaaq is a good movie recommended only for those who quest for thought provoking movies.