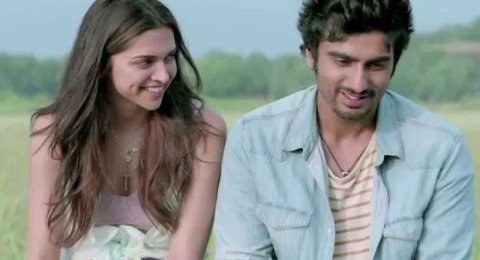 Five restless Goans, a ratty ol’ Dodge, and an unfortunate cat…that’s all the ingredients director Homi Adajania employs to whip up the lighthearted soufflé that is Finding Fanny. Sprinkled liberally with uproarious humor, the film makes some rather predictable points about love, straining its already-thin premise.

Ferdy (Naseeruddin Shah), a postmaster in a sleepy Goan village, is heartbroken when he discovers that the love-letter he posted to Stephanie Fernandes 40 years ago, never reached her. Insisting that “no one should have an incomplete love story”, his unlikely best friend, a young widow named Angie (Deepika Padukone), volunteers to help track Fanny down. She enlists the help of her old friend Savio (Arjun Kapoor), who agrees to drive them in his father’s beat-up car. Joining them on the road-trip is Angie’s bossy mother-in-law Rosy (Dimple Kapadia), and famous artist Don Pedro (Pankaj Kapoor) who finds inspiration in Rosy’s ‘full’ figure.

As Angie puts it, these five oddballs set out like “brave adventurers to find love”. But Adajania suggests that life constantly springs surprises, and the best way to deal with it is to look at life through the viewfinder of humor. This is evident in some of the film’s strongest comical scenes. The bit where Rosy’s cat digs its claws into Ferdy’s lap results in a freak accident that is played for laughs. Another hilarious scene is one in which Don Pedro slips into sexual fantasy while describing how he intends to paint Rosy.

But look beyond the obvious and there is much to admire here. The affectionate, respectful relationship between Angie and Rosy, for one, although the marriage that made them family was over in less than a day. Or Savio helping Ferdy find Fanny, which feels like life coming a full circle, if you consider the role of Savio’s father in Ferdy’s unrealized romance. There is a hint of sadness too in each of the protagonists, a bunch of quietly desperate people seeking fulfillment.

Not everything works though. The dialogues often feel like a mouthful, and not always honest to the characters speaking them. Other times they feel too clever. A post-sex conversation between Angie and Savio comes off contrived, unlike Rosy’s cheeky admission about the effect of too much liquor on her legs – it’s easily the film’s best laugh-out-loud moment.

To be fair, Adajania, who nicely captured a slice of Parsi life in his 2010 debut Being Cyrus, turns a perceptive eye to the Goan Catholic community this time. Rosy, described as “the first lady of Pokoli”, is your typical ‘take-charge community leader’, a one-stop-shop for anyone needing any help in the village. Dimple Kapadia occasionally slips into hammy mode playing the voluptuous character, but you genuinely feel for her when she’s humiliated after Don Pedro has painted her. Arjun Kapoor does well as Savio, frustrated from the personal baggage he’s carrying around. Deepika Padukone, lovely in every frame, brings a nice hint of melancholy to her part, but her long voice-overs are weighed down by flat delivery. The film belongs to Naseeruddin Shah and particularly Pankaj Kapoor, who steal every scene they’re in. Naseer, as the painfully timid Ferdy, who ultimately finds himself during this journey to trace Fanny, is consistently endearing. Pankaj, meanwhile, as the boorish Don Pedro, hits all the right notes, giving us a character that’s vulgar yet irresistibly funny.

Set in a world that feels entirely authentic, Finding Fanny is a charming film that starts off slowly but draws you into its drama. At a crisp 105 minutes, it’s a perfectly satisfying watch unlike so many disposable comedies today. I’m going with three out of five.