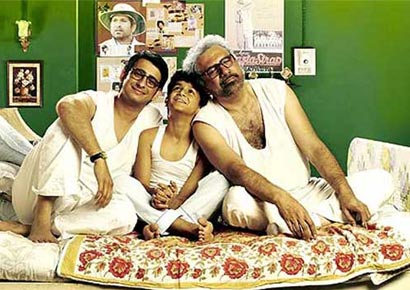 For Vidhu Vinod Chopra and company, it’s just another day at work. Ferrari Ki Sawaari continues in the banner’s tradition of clean, entertaining films that have been made under Rajkumar Hirani’s direction so far.

Munnabhai MBBS, Lage Raho Munnabhai and 3 Idiots had some similar traits – heart-warming scenes, a splash of humour, an underdog for a protagonist. Ferrari Ki Sawaari, directed by debutant Rajesh Mapuskar (former associate of Hirani), is a film hard to dislike. The story is touching, the performances honest, and the humour persistent.

Yet, the banner seems to have fallen into a trap of its own. Having beaten the formula before (3 Idiots is Bollywood’s biggest money-spinner, yet it had neither a six-pack sporting hero, nor a raunchy item song), the production house’s own mantra now seems like a formula — an emotional bond between characters, comic set-pieces, a serious twist in the plot, and the protagonist’s eventual victory. It’s all there. And it has all started to feel a bit too manipulative now.

The plot is interesting. Middle-class RTO employee Rustam (Joshi), struggling to make ends meet, dreams to send his very talented 12-year-old son, Kayo, to a cricket training camp at Lord’s, London (he’s so good, he deals in only fours and sixes most of the time). The fee is a whopping Rs150,000. In a moment of weakness, Rustam steals the only Ferrari in Mumbai — the one belonging to Sachin Tendulkar — in his bid to raise the money. But things get murkier with the involvement of an influential politician’s roguish son, a senior cricket administrator and some other quirky characters.

It’s hard to not like the large-hearted and simple Rustam, and Sharman makes sure the body language and constant tear-soaked eyes make you root for him. He’s at home playing the main lead and gives the role his all, even if it means letting Ritvik Sahore (who plays Kayo) and Boman Irani (who plays Rustam’s crabby father) take centrestage at times.

But compared to Raju Rastogi, his character in 3 Idiots, Rustam is straight-laced, leaving Sharman with little to show even though the platform is bigger. Irani could have played the Parsi old man in his sleep, and while he’s good for most part, you do wish he’d tone it down a bit.

It’s Sirohi who really impresses. A vulnerable face (which resembles Sachin’s so much, you wonder if they are related in some way), controlled acting and an endearing personality make you yearn for Kayo to triumph. Also impressive is Deepak Shirke (hitherto seen in gangster and corrupt politician roles; think Anna Shetty from Mukul Anand’s Agneepath). As the security guard who works for Tendulkar, Shirke entertains in most scenes.

Where the film flounders is the hyperbole. Time and again, we’ve compared Hirani’s films to Hrishikesh Mukherjee’s, and while the legendary filmmaker’s characters were as good-natured and lovable as Hirani’s, they were also very real. Hirani, and now Mapuskar, tend to show their characters to be a lot more extreme — either too good, or too honest, or too naive — and the situations they are put under are sometimes so unreal, you start feeling disconnected.

Hirani’s own directorial ventures did pull the exaggerated bits with aplomb, but in FKS, the plot seems farfetched after a point. You did buy Rancho’s ‘Aal eez well’ mantra making childbirth seem like a piece of cake, but FKS expects you to suspend disbelief way too often. Chopra and Mapuskar’s screenplay gets outrageously melodramatic towards the end (the climax seems like it was shot at the same Lage Raho mandap). Hirani’s dialogues, though, are fairly entertaining, and help keep the plot engaging.

Chopra, in an interview to an entertainment supplement, said that the rubbish films make a hundred crore nowadays. Ferrari Ki Sawaari may be far better than the films he’s referring to, but its ‘good’ intentions can be taken with a pinch of salt.

Tailor-made to elicit a few tears and a little laughter, Ferrari Ki Sawaari is worth a watch for Sirohi, Sharman and some genuinely sweet moments.