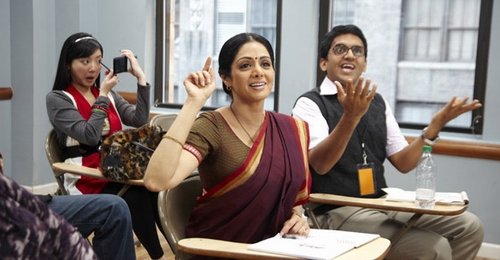 Returning to the screen after a hiatus of 15 years in first-time director Gauri Shinde’s charming comedy English Vinglish, Sridevi hits all the right notes.

Five minutes into the film, and she’s already found her way into your heart as Shashi, the uncomplaining Maharashtrian housewife who quietly puts up with the playful but insensitive jibes her husband and kids take at her, for her inability to speak proper English. It’s such a terrific performance in fact, that it makes you overlook the rather trite notion that a caring wife and mother, who runs a small but successful catering business from home, must speak fluent English in order to regain her sense of self-worth.

Shinde, who has revealed that the film’s premise is inspired by a slice of her own mother’s life, constructs some moving scenes that are not hard to relate to. Shashi’s school-going daughter cringes in embarrassment at a PTA meeting when her mother asks a teacher if he could speak to her in Hindi because her English is weak. When another parent engages her mother in a conversation, she nervously steers her mum away.

There’s little that’s blazingly original here; much of it feels formulaic and predictable, in fact. Yet Shinde knows there’s comfort to be found in the familiar, and she mines feel-good moments in been-there-seen-that territory.

Things come to a head when Shashi reluctantly travels alone to New York to help with preparations for her niece’s wedding. Humiliated while struggling to order a coffee and sandwich at a Manhattan café, she impulsively enrolls for a four-week English speaking course at a language school. From this point on, the film resembles an episode of the popular BBC sitcom Mind Your Language, whose laughs are derived from a motley bunch of foreigners wrestling with English. Typically, the class comprises a Mexican nanny, a Pakistani cab driver, a Chinese hairstylist, a South Indian software engineer, an angry black kid, and a dishy French chef named Laurent (Mehdi Nebbou) who’s instantly attracted to Shashi.

In these classroom scenes, Shinde uses her characters to deliver a message about Indo-Pak camaraderie, and even against homophobia. Yet these seem like mere tokenisms against the more natural, tender scenes between Shashi and Laurent. Like those moments when the two are conversing in their respective languages, and yet manage to convey what they’re feeling to each other – it’s these interludes that make English Vinglish so watchable.

This is the story of how Shashi gets her groove back, and Shinde nails it by casting Sridevi in the central role. The actress is effortlessly charming as the neglected protagonist who discovers herself when she’s allowed to fly. She infuses the part with the right portions of vulnerability, restraint, and quiet strength, delivering a performance that is nothing short of perfect.

Even if it treads a safe path, English Vinglish achieves believability through its supporting cast of mostly unfamiliar faces, including Mehdi Nebbou as Shashi’s sensitive French admirer, and Adil Hussain as her inattentive husband. Sujatha Kumar as Shashi’s older sister oozes warmth, and both kids playing Shashi’s children are spot-on. There’s also a delightful cameo by Amitabh Bachchan, who steals the scene he’s in with his impeccable comic timing.

Making an assured debut with a light, frothy film that still has something important to say, Gauri Shinde delivers one the year’s most pleasing films, and Amit Trivedi lends some of his best compositions to the soundtrack. I’m going with three-and-a-half out of five for English Vinglish. It’s warm and fuzzy, and leaves you with a big smile on your face.