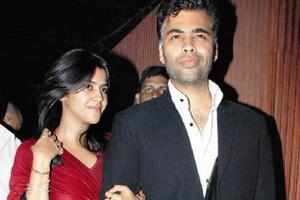 “He is known for his candyfloss movies and designer dramas, and she excels at making experimental and real life-inspired stories. Together, Ekta Kapoor and Karan Johar, once rumoured to be a couple, are now ready to co-produce a movie.

“Ekta and I are super excited about the script we are producing together… will announce details as we cast the film and title it!!!” Johar posted on his Twitter page Wednesday.

According to reports, the film will be a “love story with a twist”, and it will be directed by Akshay Roy.

It will be interesting to see what Johar’s Dharma Productions and Ekta’s Balaji Motion Pictures will have to offer considering their different styles of filmmaking.

The rumour about Johar and Ekta’s romance had reached its peak when news of their wedding started doing the rounds three years ago.

But they have been good friends since childhood, and have been looking forward to working together for a long time.”