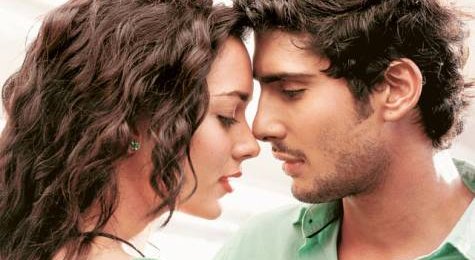 With Ekk Deewana Tha director Gautham Menon takes his third stab at the same story, having directed successful Tamil and Telugu versions previously. This Hindi remake is a disappointing bore of a love story that tests your threshold for pain as it hobbles along indulgently for close to 2 hours and 40 minutes.

Prateik Babbar stars as Sachin, a 22-year-old middle-class engineering graduate who dreams of making movies one day. When his family moves into a rented home in Juhu, Sachin finds himself instantly smitten by the landlord’s daughter Jessie (played by British model Amy Jackson) who lives in the house above.

Jessie is a year older than Sachin, she’s a Malayali Christian, and her family has disdain for people involved with films. She’s attracted to Sachin, but she knows it’s not going to work out. Not one to give up easily, Sachin pursues her relentlessly, even following her all the way to Kerala in the hope of changing her mind. Floored by all the attention, she gives in…only to keep changing her mind every now and then, driving both Sachin and the audience completely nuts.

Charming in a goofy sort of way, Prateik Babbar makes the film’s first thirty minutes or so watchable even though very little happens here. His awkward body language and his nervous tics are refreshing, especially as his character, Sachin, skulks around spying on Jessie, and stalks her even. The same, unfortunately, can’t be said for the film’s pretty but vapid leading lady, whose lines appear to have been dubbed by someone much older than herself. Surprisingly, the actress is poorly made-up, and for much of the film sports an obviously fake tan. The couple’s chemistry is lukewarm, and save for a few inspired moments their banter is grating.

Cutting between Mumbai and Kerala, the film’s second half meanders carelessly, and at such a sluggish pace you’ll have to check your pulse to make sure you’re still breathing. Manu Rishi, who plays Sachin’s mentor, and a Bollywood cameraman, infuses some energy with his smart lines and his natural style of acting. But it’s not enough to save this sloppy film from its imminent fate. The resolution of the couple’s conflict is so convenient, you’ll want to smack them for not arriving at it one hour ago.

I’m going with a generous two out of five for Ekk Deewana Tha. Even A R Ramhan’s score offers only sporadic relief. The only real discovery you make through this film is Prateik Babbar’s immense likeability. Now if only the kid could act!