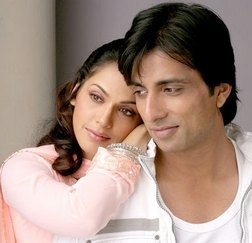 Ek Vivaah Aisa Bhi has a story that seems so implausible in today’s world. It is the remake of a 1976 Rajshri movie ‘Tapasya’ starring Rakhee Gulzar and Parikshat Sahni. Its a wannabe ‘Hum Aapke Hain Kaun’.

The story has the evil chacha and chachi, the evil sister-in-law, the henpecked husband. Its full of cliches and filled with songs which come in like every 5 minutes.

The movie deliberately creates situations that show the great sacrifies that Eesha Kophikhar makes. Eesha has to take care of her siblings after the death of her father and decides not to get married to Sonu.

Eesha Koppikhar is no Madhuri. In the initial scenes she tries her best to look like Madhuri. She is ok but somehow does’nt suit the role. Sonu looks old even in the initial scenes when he is supposed to be a college student. He does’nt suit the role too. Vishal Malhotra tries his best but he cant act. Alok Nath is in the usual girl’s father role and acts the same way he does in all his movies. The others cant act.

The movie is filled with so many songs and not a single song is good. Ravindra Jain’s music is so stale and ordinary and the lyrics are ridiculous. The lyrics are just normal sentences set to music.

The movie looks like an Ekta Kapoor serial. The movie is torture and avoid it at all costs.