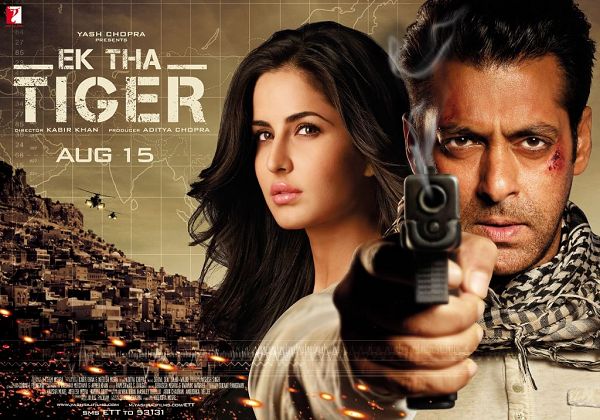 The Hindi film industry is not new to espionage themes. Rather, the secret agent thrillers date back to the 60s and 70s. Recall films like ANKHEN, INTERNATIONAL CROOK, FARZ, SPY IN ROME, JEWEL THIEF, also THE GREAT GAMBLER, SURAKKSHA, AGENT VINOD and GOPICHAND JASOOS…

Post WANTED, DABANGG and BODYGUARD, all Eid releases, Salman Khan and Yash Raj, the premier production house, unleash their first collaboration together, again on Eid. The Pied Piper of the Hindi film industry, who is on a dream run, delivering one Blockbuster after another, is expected to shatter previous records and set new ones at the box-office.

Is EK THA TIGER at par/better than the previous Salman starrers? All I’d say is that the comparisons, though inevitable, are erroneous. As a standalone film, EK THA TIGER is enthralling and most significantly, an entertaining motion picture. On the exterior, it is a compelling love story/thriller. But beneath the entertainment that it offers, it carries a message as well. Loud and clear. If the spectators can see through the coating, great. Even if they don’t, they will yet go back in high spirits.

Let me clarify, EK THA TIGER is not a ‘dark film’. No jingoism. No political statements. This is no James Bond duplication either. It reintroduces a megastar, who is at the pinnacle of his illustrious career, in a wholly new space. This one’s made by a desi, with desi sensibilities, but targeting the desi audience as well as those beyond the shores of the country. So, there!

In the dark world of intelligence and espionage, all information is guarded in the name of national security. But some stories escape the fiercely guarded classified files…

In a government employees’ neighbourhood in New Delhi, there lived a rugged, handsome and mysterious bachelor about whom his neighbours knew nothing. That was because he was India’s top spy, an officer with the Research and Analysis Wing [RAW]. This man was known even in official corridors as Tiger [Salman Khan].

Tiger is sent on a relatively easy and safe mission to Dublin, Ireland to observe a scientist of Indian origin [Roshan Seth], who is suspected of sharing his research findings with the Pakistan defence establishment. Tiger attempts to meet the scientist, but is not successful. He tries to befriend the scientist’s part-time home caretaker, Zoya [Katrina Kaif]. As Tiger begins to get closer to Zoya, he begins to discover his human side. For the first time in his life, Tiger falls in love…

What follows is a tumultuous journey that Tiger and Zoya embark upon, battling the dark world of intelligence and espionage that forbids its soldiers from falling in love.

Come to think of it, when you saunter into a cineplex to catch EK THA TIGER, what you want, more than anything else, is an adrenaline rush. Director Kabir Khan’s take on a RAW agent is very close to real, but, at the same time, it’s not a docu-drama. Nor is the agent a clone of Jason Bourne or James Bond. Like I pointed out at the outset, it’s desi at heart. Also, clever, amusing and thoroughly entertaining.

Kabir Khan’s direction is thoughtful, focused and never goes off-track. In fact, EK THA TIGER takes the detective genre in Hindi movies to a fresh altitude. Besides, Kabir and co-writer Neelesh Mishra open the cards gradually and the highpoint is the interval point when Salman unravels something shocking. Post interval, the film throws one surprise after another and it reaches its crescendo in the concluding stages, with the climax making a solid impression.

EK THA TIGER travels across the globe to capture some of the most exotic locales in the world and the DoP [Aseem Mishra] captures them with flourish. EK THA TIGER has a pleasant score [Sohail Sen, Sajid-Wajid]. ‘Mashallah’ is the pick of the lot, followed by ‘Banjara’ and ‘Laapata’. The stunts are truly crackling. In fact, the action sequences are of the heart-in-the-mouth variety and if one may add, such stunts and chases have never ever been witnessed on the Hindi screen before. The dialogue is intelligent and sharp.

Blemishes? Not really, but, yes, the leisurely unfurling of the love story in the first hour slackens the narrative occasionally. Since the sequences are so cute and the fact that the ones performing them are Salman and Katrina, one doesn’t really mind it, actually.

When you have Salman in a movie titled EK THA TIGER, the director doesn’t need to convince the audience that he is a tiger. Salman looks the part! Clutching the thriller with his dynamic presence and performance, Salman is, without doubt, the lifeline of this film. He pulls off the part with flamboyance. Also, he brings in so much visceral rousing energy to the film, every time he appears on the screen. Salman and Katrina pair up after a hiatus in EK THA TIGER and their chemistry is electrifying. Though an out-and-out Salman starrer, Katrina is not relegated to the backseat. Neither is she Salman’s arm candy here. She has a meaty part and to her credit, she handles it with aplomb. Also, watch out for her stunts… This is a new Katrina here!

Girish Karnad is excellent. Ranvir Shorey is first-rate. His scenes with Salman are truly wonderful. Roshan Seth is adequate.

On the whole, EK THA TIGER is a high-octane thriller that works big time. This one has style and substance, both, besides dazzling action, stunning international locales and stylish execution. Most importantly, it has Salman Khan, the trump card of this enterprise. There’s no denying that Salman’s charisma has resulted in a mind-blowing, astounding, never-seen-before start at the ticket window, but the film’s content will sustain it thereafter. The film has long legs to prolong its splendid run. This is, without doubt, Salman’s best. Sure shot Blockbuster!