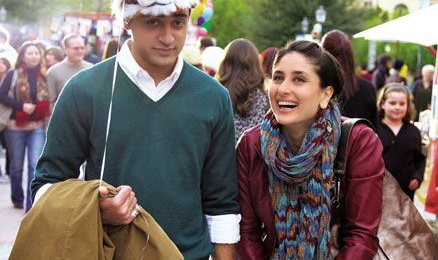 Ek Main Aur Ekk Tu, starring Imran Khan and Kareena Kapoor, is a competently made romantic-comedy with a predictable story at its core. A straight-laced architect meets a free-spirited hairdresser in Vegas; they get drunk one night, and wake up the next morning to find out they’re married. Even as they decide to annul the marriage, the couple realizes they have a connection.

It’s fairly typical stuff, and first-timer Shakun Batra adds all the usual ingredients. If you’ve seen even three decent rom-coms, you know where this is headed. Yet these characters feel real, and they grow on you gradually despite their standard-issue problems – he has controlling parents, she only lives for the moment. But it’s the curveball that the writers throw at you in the end that displays a rare maturity about relationships that films in this genre seldom possess.

It’s hard to believe, I know, given that the film opens with a stereotypical and slapstick introduction to Imran’s character, Rahul The first 20-odd minutes or so are a bumpy affair, but the film picks up steam once the leads are thrown together and left to work through their differences.

Ek Main Aur Ekk Tu is a narrative that unfolds mainly through dialogue, and the lighter moments come at you as the odd couple gets to know each other. The humor hits the mark many times and falls flat occasionally, but the movie doesn’t grate because the characters aren’t trying too hard to be cute. A scene in which Rahul’s ex-girlfriend decides to get frisky with him in a restaurant toilet stall, much to his horror, is amongst the high points in the film’s first half.

There are touches of Jab We Met to be found here as Kareena’s character, Riana, encourages Rahul to let go of his inhibitions and live a little. In fact, like that runaway hit, Kareena ends up being the soul of this film too, although Riana is more urban and polished than Geet. And like that distinctive Punjabi set in Jab We Met, we meet Riana’s jolly Goan-Catholic bunch when the couple lands in Mumbai. Even Rahul’s parents, played by Boman Irani and Ratna Pathak-Shah, are total stereotypes. She’s a fashion-obsessed socialite, and he a humorless, success-driven businessman; yet these caricatures are salvaged by convincing performances.

Despite his wide-eyed, one-note approach in the early scenes, Imran Khan slips comfortably into his role as the story moves along – he’s fantastic when he has meltdowns; like that emotional one with Kareena in a school, or seething with anger against his parents at a dinner table. It’s refreshing also to see him let go in the foot-tapping Auntyji song, and he shares a surprisingly warm chemistry with Kareena. Meanwhile, it’s heartening to see the actress sink her teeth into a role she deserves, and has fun with. She may not be treading new ground here, but Kareena infuses energy into even ordinary talkie scenes, and strikes you with how fresh-faced she can look after all these years.

At 1 hour and 50 minutes, the film is light and breezy, and mercifully never turns too syrupy for your taste. I’m going with three out of five for director Shakun Batra’s Ek Main Aur Ekk Tu. I was particularly impressed by the unconventional but entirely appropriate ending. I think you will be too.