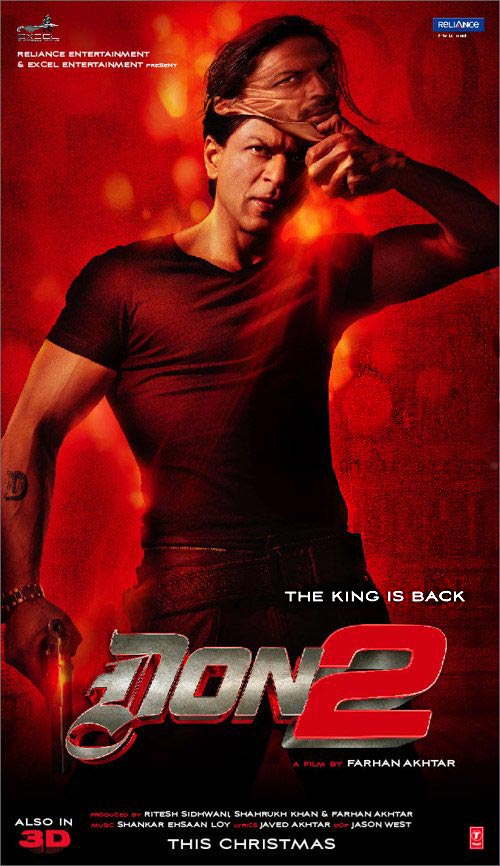 Having conquered the Asian underworld, Don (Shah Rukh Khan) now has his sights set on European domination. In his way are the bosses of the existing European underworld and all law enforcement agencies. The action shifts from Kualo Lumpur to Berlin as Don must avoid assassination or arrest, whichever comes first, in order for his plan to succeed. He surrenders himself to the Interpol so that he can help Vardhan (Boman Irani) escape from prison because he needs him for his plan to steal currency plates. The rest of the movie is whether Don succeeds in his mission or not.

The Don remake (Don – The Chase Begins) was a boring, slow paced movie which was mostly style over substance. The best and the redeeming part of that one was the final twist which was one of the best twists in Hindi movies. Don 2, though a bit slow paced, is much better than the first one with lots of twists and a final twist which many will not be able to guess. Some of the scenes stand out like the fight scenes in the Jail or the car chase scene or the Hrithik cameo or Don watching Tom & Jerry cartoons or the twist with the light in the vault or the final twist scene.

Screenplay by Farhan Akhtar, Ameet Mehta and Ambrish Shah is quite complex with lots of twists and turns. Some scenes are inspired from various movies like Mission Impossible, Ocean’s Eleven and The Italian Job but the script is still original. With a heist thriller like this one tries to guess what the next twist would be but the movie manages to surprise at every point. The final twist is done really well. Dialogues by Farhan Akhtar written for the Don character are very good but they could have been better for the other characters.

Shah Rukh Khan was bad in the Don remake except for the final scene. It seemed he was overacting and trying too hard to be cool when mouthing dialogues made iconic by Amitabh Bachchan. But here free from the burden of comparisons with the original he acts really well. He is subtle and does not overact and makes the role his own. Priyanka Chopra looks gorgeous but it seems she is trying too hard to be cool. She is good in the final fight scene though. It does not help that she has a bimbo styled role. Boman Irani acts well as Vardhan though at times it seems he is scowling too much. Aly Khan acts well as Divan. Nawaab Shah is good as Jabbar. Om Puri does not have much to do except mouth cliched dialogues just like Iftekar did in the original Don. Lara Dutta is decent in a very brief role. Kunal Kapoor is ok. Hrithik is excellent in a brief cameo.

Cinematography by Jason West is excellent especially in the chase sequence which is shot really well. The beautiful foreign locales also add to the international feel of it. Editing by Anand Subaya however could have been better. It is very important for a thriller to be pacy but there are scenes where it seems the movie is slow paced. There was no need for the track between Sahil Shroff and Priyanka Chopra. But then Editing has always been a problem for Farhan Akhtar movies. Action scenes are done really well with the military styled close combat. Art direction looks a bit bad in some scenes like the vault scenes.

Thankfully there is only one song “Zara Dil Ko Thaam Lo” in the movie which is decent. Vishal Dadlani has sung it well. There is another one “Hai Ye Maya” which plays in the background and a final one which plays in the end credits which one can skip. Background music is good in some scenes especially when it uses the Don signature tune but it could have been better in many other scenes. The movie does not have any background music in some scenes which makes one feel the movie is slow paced. This again has been a problem with all Farhan Akhtar movies since Dil Chahta Hai.

Farhan Akhtar’s direction is excellent for the most part. But he needs to understand that editing has to be top notch in a thriller and one cannot afford to have scenes that do not add to the movie. There should not be any scenes with no background music either. He however manages to make a slick Hollywood styled heist thriller. This movie may not appeal to people who want masala action or item numbers but its good that he does not dilute the movie with such compromises. It might also not appeal to people who do not want to use their brains as the movie demands constant attention. Don 2, albeit slow-paced at times, is a very good thriller and one of the best movies this year.