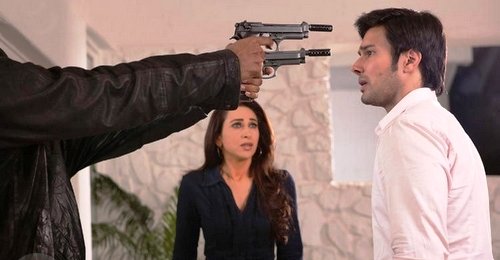 From matching Govinda’s razor-sharp comic timing in so many David Dhawan entertainers, to delivering sincere, heartfelt performances in films like Fizaa and Zubeidaa, Karisma Kapoor has had no shortage of opportunities to show off her acting chops. But returning after a hiatus in director Vikram Bhatt’s laughably silly Dangerous Ishq, the actress is limited to gritting her teeth and mouthing inane lines.

Karisma stars as Sanjana, a supermodel and committed girlfriend who searches for clues in her past, when her industrialist boyfriend (Rajneesh Duggal sporting a single expression throughout) is kidnapped. Relying on ‘visions’ that offer her glimpses into her previous lives, Sanjana discovers she’s had a doomed romantic connection with the same man over the ages. To solve the mystery of his kidnapping in the present day, she must first figure out who has been keeping them apart in their every birth.

From struggling through communal feuds in Partition-era Punjab, to facing betrayal from a trusted friend in Daulatabad during the Mughal rule, to spurning the advances of a sleazy senapati in 16th century Rajasthan…it’s hard to keep a straight face as Sanjana rewinds to previous lifetimes, and the film in turn becomes increasingly preposterous. Despite its curious premise, the plot of Dangerous Ishq feels overstuffed and far too convenient, and as a result the film’s central idea, of past life regression, is never convincingly conveyed.

If anything, the film is unintentionally comical, thanks in no small part to its clunky dialogue, bizarre characters, and ham-fisted direction. Save for some tacky special effects and a few badly done explosions, Bhatt mostly resists the temptation to throw things at you in order to exploit the 3D, but the imagery here is so bland that the technology feels wasted.

Ambitious but seriously flawed, the film smacks of laziness in virtually all departments, and even Karisma Kapoor’s earnest performance can’t save the day. I’m going with one-and-a-half out of five for director Vikram Bhatt’s Dangerous Ishq. Plodding on for close to two hours and thirty minutes, this film will make you wish you’d knocked back a stiff one before taking your seat.