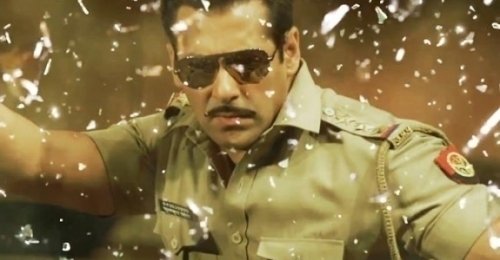 Given that Dabangg 2 is a family production in every sense of the term – Salman Khan stars, his brother Arbaaz directs, Arbaaz’s wife Malaika Arora produces, and their sister Alvira Agnihotri does costumes – you can’t help but wonder why no one thought of roping in their father, veteran screenwriter Salim Khan, to slap the script into shape. Because while there’s some fun to be had watching Chulbul Pandey bash up the bad guys again and share a tender romance with his missus, nothing even remotely interesting happens in this film.

Now posted in Kanpur, our swashbuckling police officer hero applies his unique but unconventional methods of dispensing justice to keep kidnappers and thugs off the street. Having mended his relationship with his step-father (Vinod Khanna) and half-brother (Arbaaz Khan), and with his wife Rajo (Sonakshi Sinha) carrying his bun in her oven, Chulbul has none of the personal baggage he had to deal with in the earlier film. His only conflict here is with corrupt local politician Bacha Bhaiyya (Prakash Raj) and his hoodlum brothers, who have no regard for the law.

Arbaaz Khan, taking his first stab at direction, delivers a harmless and inoffensive film, but one that doesn’t have any of the unpredictability of Abhinav Kashyap’s Dabangg from two years ago. That film’s unique cocktail of irreverent humor and comic-book action made up for many of its script flaws, and gave us some truly terrific moments. Like that scene in which Chulbul breaks into a jig to the caller tune of a mobile phone that goes off during an action scene. Or that portion in which Chulbul’s shirt rips off his chest when he flexes his muscles. Arbaaz, for his part, comes up with little that’s original, repeating both those bits in Dabangg 2, only tweaking them slightly.

That’s true of the entire film, to be honest, which feels like a pale imitation of Dabangg. Between the dozen-odd action scenes filmed in slo-mo to suggest the impact of every punch, and the obligatory bosom-heaving item song, you’ve seen it all before. Clever punch lines are few and far between, and even Sajid-Wajid’s music has a recycled quality to it.

But a key problem with this sequel lies in the weak choice of villain. Prakash Raj, usually a competent actor, is reduced to a nostril-flaring, bulging-eyed caricature who poses none of the physical threat that Sonu Sood’s Chhedi Singh represented in the earlier film. Deepak Dobriyal, playing Bacha’s brother here, offers a deliciously slimy performance, but the character is terminated in what is possibly the best scene in the film, that takes place as early as interval point.

Expectedly Dabangg 2’s only strength is Salman Khan himself, who is the glue that holds together this slipshod film. He’s charming in his romantic, cheeky scenes with Sonakshi Sinha, he’s mischievous and endearing while teasing his father, and plain hilarious in his interactions with his sidekick cops. Sadly, Chulbul Pandey is an extraordinary man trapped in an ordinary, unexciting world in Dabangg 2.

I’m going with a generous two-and-a-half out of five for Arbaaz Khan’s Dabangg 2. What this film needed was personality and character; what it’s left with is sameness. But that’s probably enough for Salman Khan fans.