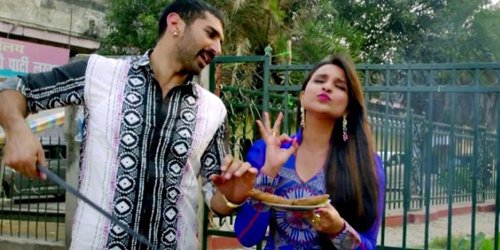 Texture is everything, and writer-director Habib Faisal is in on that secret. From the car-purchasing ambition of a middle-class school teacher’s family in Do Dooni Chaar, to the rapidly expanding business plans of a pair of hardworking Janakpuri entrepreneurs in Band Baaja Baaraat (which Faisal scripted), he understands well that rooting one’s characters in a world that feels familiar and relatable is half the battle won. That’s the part he gets right again in Daawat-e-Ishq, whose universe feels real and characters fully flesh-and-blood even if their actions aren’t entirely convincing.

Tired of encountering dowry-seeking families and spineless prospective grooms, working-class Hyderabadis Gulrez (Parineeti Chopra) and her father (Anupam Kher) hatch an outlandish plan to get even. This brings them to Lucknow, where strapping kabab-shop heir Tariq (Aditya Roy Kapur) walks right into their trap. Inevitably, complications arise when love threatens to derail this carefully planned con.

Not many Hindi films have successfully woven food into their narratives, but Faisal achieves that nicely from early on in Daawat-e-Ishq. Kababs, biryanis, jalebis and phirnis all get their close-ups, yet the film is unmistakably bland. For one, the romance between the protagonists feels hurried and unconvincing, established quickly over a bunch of songs. The climax too, which unfolds at a railway platform, is so rushed and convenient that you’re never fully satisfied that the issues between them have been truly resolved. More problematic, to be honest, is the film’s sloppy handling of the very issue it claims to address. Think about it: we’re meant to root for a woman who brazenly misuses a provision made by law that protects victims of dowry harassment.

Fortunately the actors bring their A-game to the film, glossing over many of the script problems. Parineeti Chopra is genuine and affecting, although she’s played this kind of spirited character a few times before. Aditya Roy Kapur, in a part more flamboyant than he’s tackled previously, gets the body language just right and builds from there. Anupam Kher strikes the right balance between comical and vulnerable, constructing a character that feels immediately recognizable.

Daawat-e-Ishq coasts along comfortably until intermission, then comes undone when multiple twists in the second half require complete sacrifice of logic. The humor dries up fast, and even at a running time of 2 hours, the film feels overlong.

I’m going with 2 out of 5. What started off promisingly is never fully exploited. Shame.