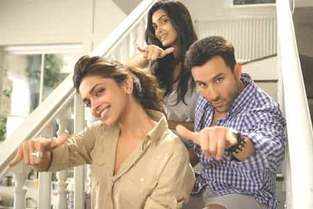 Story: Gautam likes Veronica. Veronica likes him too. Gautam falls for Meera. Now what does Meera do? Three close friends find themselves caught in a vortex of emotions.

Movie Review: Two’s company; is three a crowd? Homi Adajania’s romantic comedy Cocktail is a slice-of-life film mounted beautifully and imaginatively on a large canvas with the vibrant colours of London, Cape Town and New Delhi. The film addresses the proverb–two is company; is three a crowd–situation throughout. With some super-light, sweet moments that one has seen in the mid-90s American sitcom Friends; that revolved around a group of friends in Manhattan; Cocktail deals with the fun moments and then the emotional turmoil faced by three Indian friends settled in the UK, whose paths cross inadvertently.

Saif (Gautam)-the flirt; Veronica (Deepika) the rich-bitch and Meera(Diana Penty)the simpleton find themselves under one roof singing daaru desi and dancing to tum hi ho bandhu in perfect sync and rhythm. To start of, the wild yet vulnerable Veronica and the shameless flirt Gautam are happy to be in a no-commitments relationship, providing laughs galore. Veronica’s best friend Meera is also happy to be the flower wall around the house, making sure not to get in the way.

Written by Imtiaz Ali, the script in the pre-interval phase breezes through with some light-hearted camaraderie between the three lead actor; some comic moments (provided by Dimple Kapadia playing Saif’s loud Punjabi mother); and has rocking tracks by Pritam that transport you straight into the night-club mode, singing and moving in your cinema-hall seats. However there’s also a downside. For example, the music provides an adrenaline rush and the comic scenes make you smile; but there’s a drastic drop in the tempo during some of the talkie portions, where the gaps in the conversation make you restless.

Also the friendship between the two girls—Veronica and Meera is captured realistically and runs deep; but the same cannot be said for the relationships the girls share with Gautam. While Veronica and Gautam’s equation comes across as flaky; Gautam’s love for Meera too could have translated into a deeper passion. The longing and the yearning doesn’t come across like it did in a Jab We Met or a Love, Aaj Kal. In all fairness where Cocktail scores, is the fact that most of us living in urban metro India, will definitely be able to identify with the three principle characters and what the emotional upheaval that this bunch of friends go through. The bonding, the fun-filled moments do strike a very real chord.

The film takes a more serious turn in the second half when friendship makes way for love. Yes, Cupid strikes at the intermission point; and the film follows the oft-seen path of a typical triangular drama that has been a Bollywood staple through the last two decades.

Cocktail does have some terrific highs. One is Deepika Padukone’s performance. Easily the best in her five-year-long career; Deepika also looks sensational throughout. You almost wish the camera had stayed her longer on her in that red itsy-bitsy bikini. DP will definitely win notices and nominations for her near-faultless performance of the rich-spoilt-neglected-girl-with-a-heart-of-gold.

Saif is terrific in parts, insipid in others. And the other DP, Diana Penty makes for a pretty picture; but she could certainly do with some polishing.

Randeep Hooda as a rake, running a hoax marriage business, is completely wasted.

Pritam’s music is charged and chartbusting. While tum hi ho bandhu and daaru desi are right on top; yaariyan and jugni are stirring and soulful.

The dialogue is funny; even outrageous with lines like–`I’m carrying his bun in my oven’ and `you’re lonely-I’m characterless.’

However what Cocktail should be truly applauded for is its permissiveness. As a film it breaks shackles and ushers in a new free spirit that Gen-Now will relate to.

Tip off: Go see Cocktail with your closest friends. It will definitely strengthen the bond.