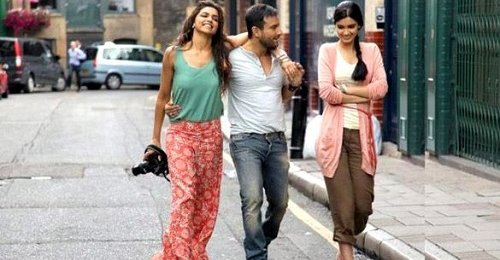 It’s not enough that he’s sharing a flat with two gorgeous women, having casual sex with one, while the other does everything from his laundry to making him breakfast…he had to go and fall in love, and ruin what most men would describe as “living the dream”.

Alas, Cocktail, directed by Homi Adajania, is no saucy menage a trois, although it does involve three friends living together in London, a little too close for comfort. No, Cocktail falls firmly in the rom-com space. But even as the tone shifts uncomfortably from breezy, light-hearted fun, to heavy drama in the second half, you’re never in danger of actually caring for the cardboard characters in this empty souffle of a film.

Serial flirt Gautam (Saif Ali Khan) has a fleeting encounter with shy Delhi girl Meera (Diana Penty) when he serenades her at the airport on her first day in London. Meera bunks with smoking hot wild-child Veronica (Deepika Padukone) when she realizes she has nowhere to go in an alien city. Before long, Gautam is sharing their home and Veronica’s bed. Complications arise when Gautam falls for Meera, but Veronica decides he’s all hers.

Co-written by Imtiaz Ali, Cocktail has bursts of entertainment — like the moment when Gautam’s ultra-conservative mother (Dimple Kapadia) walks in to her son dancing on Veronica’s couch in drag, or one in which Veronica must pretend she’s passed out from drowning. It’s also a faultlessly pretty picture; the visuals seem cut from a glossy music video, especially one sequence in which a tormented Veronica is rocking a crowded dance floor, yet feels as if she’s all alone in the disco. In fact, director Adajania consistently manages to capture the energy behind each song, especially the catchy Tumhi ho bandhu number, and yet he uses silence impressively in several scenes.

The film attempts to be mature about pre-marital sex and adult relationships, and one scene at a kitchen counter in which Gautam explains their predicament clearly is nicely done, without falling prey to melodrama. But Cocktail slips just as often into cliche…like when ‘good girl’ Meera acts as if she’s tainted by real pasion, or when she sacrifices her love for her best friend. It’s the script that is to blame here, given that the film suffers from lazy, loopy writing. Everyone is trying too hard — to be cool, hip, funny or convincing — and as a result the film gives off the feeling that this generation is completely superficial, with no real emotions.

Cocktail also never offers you a real sense of who these characters are – you almost never see them at their jobs, they appear to have no friends apart from each other, and there are way too many unanswered questions about their families. By the time the movie works itself into the messy love triangle, and Veronica teeters off the Fatal Attraction bend, you feel as if the makers are driving around aimlessly, lost for direction.

There isn’t much subtlety in the performances in Cocktail, but it’s Deepika Padukone who walks away with the best role. As attention-seeking Veronica, she injects fun and darkness into the character, and gives evidence of an as-yet-unseen confidence. Boman Irani and Dimple Kapadia raise many laughs as Gautam’s loud, yet funny family, although Dimple ought to sue the makers for those unflattering close-ups. To be fair, you’ve seen Saif do the ‘incorrigble flirt’ thing better and funnier in the past, and it doesn’t help that he appears too old to play the charming rake-who-falls-hard all over again. Saif is sincere, but it’s a tired take. Diana Penty, meanwhile, is refreshingly natural, her vanilla part salvaged by her sheer arresting beauty.

I’m going with two out of five for director Homi Adajania’s Cocktail. With the right ingredients in the right proportions, this might have made for a smooth concoction. But Cocktail is a mostly flat romance; one that could’ve done with more heart.