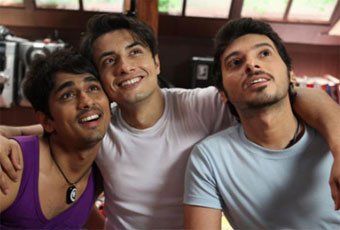 Like a battering ram, David Dhawan’s puerile and frenzied remake, Chashme Baddoor, shatters and mauls your memories of Sai Paranjpye’s charming original. Light-hearted humor and innocent romance makes way for sexist jokes and cheesy puns…and the merits of keeping things simple are lost in the cacophony of screechy performances.

But I have a confession to make here – I didn’t hate the film. Dhawan is no Paranjpye, and his cinema is as subtle as a sledgehammer. The new Chashme Baddoor does no justice to the 1981 gem, but it’s not unwatchable either. What Dhawan’s shrewdly done – under the guise of remaking a much-loved classic – is repeated the template of many of his own previous films: Best friends fall for the same girl. When she’s leaning towards the other guy, what do you do? Sabotage their relationship, what else?

If the film doesn’t stink, it’s because Dhawan’s hired an enthusiastic trio of male leads who make the most of the wafer-thin material they’re provided. Sid (Ali Zafar), Jai (Siddharth), and Omi (Divyendu Sharma) are roommates sharing a rented home in Goa. Ever the slackers, Jai and Omi spend their days pawing girls and cracking lewd jokes. When their attempts to land the new girl in town (Tapsee Pannu) fall flat, they’re hell-bent on making sure Sid doesn’t succeed where they failed.

The dialogues are pedestrian but the actors – particularly Siddharth and Divyendu – often make them work because of their sharp timing. The entire film, in fact, hinges purely on the chemistry of the boys, who ride over many of the script contrivances. The same, unfortunately, can’t be said of the leading lady who exudes the charm of an ice cube.

In the Lallan Miyan role from Paranjpye’s film, Dhawan casts a heavily tatooeed, motorbike-riding Rishi Kapoor as the owner of a nearby restaurant whom our heroes permanently owe money to. He has a nice romantic track with Lilette Dubey who plays the boys’ landlady.

Still, the new Chashme Baddoor doesn’t entirely work because Dhawan appears conflicted between taking the characters on a journey of his making, and sticking to the blueprint of the original film. Much of the final act involving a fake kidnapping feels too naïve in a modern story, and Dhawan can’t seem to skillfully adapt the simple plot turns of the earlier film to his current day version.

If you’re willing to leave the memory of the earlier film at the door, there’s a chance you might enjoy the rat-a-tat sparring between the leads, and you might even find yourself chuckling at some of the crude humor.

I’m going with two-and-a-half out of five for David Dhawan’s Chashme Baddoor. Like junk food, it has no nutritional value. But an occasional bite doesn’t hurt.