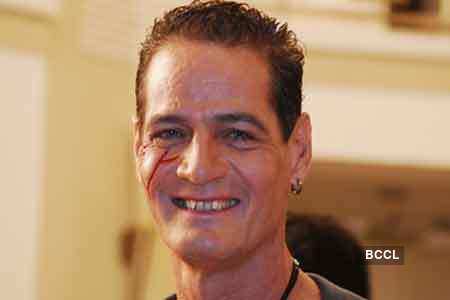 British origin Bollywood baddie Gavin Packard gave up his fight against respiratory disorder on May 18, 2012. The 48-year-old actor, who had featured in many a blockbuster including Sadak, Tridev, Karan Arjun and Mohra breathed his last at a nursing centre in Vasai at 4 am.

His funeral was held at St. Andrews Burial Grounds in Bandra on May 19. And though around 200 people came to pray for his soul, the film industry that was close to his heart was conspicuous by its absence.

However, when contacted the many stars who had worked with Gavin and had also been coached by the national award winning body builder, they expressed grief over his demise.Talking to Mumbai Mirror, Suniel Shetty said, “It makes me very sad to learn about Gavin’s death. He was a part of all my initial films. In fact, he was the one who got Sanju (Sanjay Dutt) into body building, Bahut acha aadmi tha par producers se paise maang nahi sakta tha. Then at the end of the day, it becomes a hand to mouth existence. We used to train together a lot and when it came to bodybuilding, he was a pioneer. He exactly knew about every muscle, food intake. Any action film you say, he was there.”

Sanjay Dutt said, “He was like a brother to me. He introduced me to body building. I am a Godfather to his daughters also. I’ll pray for his peace. I am there for his family always. Gold bless his soul.”

Salman Khan’s bodyguard Shera, who had even trained with Gavin, told , “I knew him even before he came into films. He would be a part of a lot of body building competitions that I would also participate in. He had a nice personality and physique and I am very sorry to hear about his death. He was a friend of mine. Bahut achcha aadmi tha.”

As told to Mehul S Thakkar