Business of Rs 100-cr films: Who gets what and why ( Economic Times) 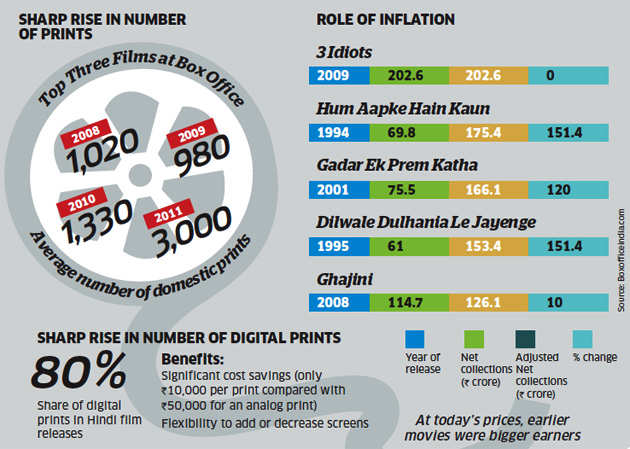 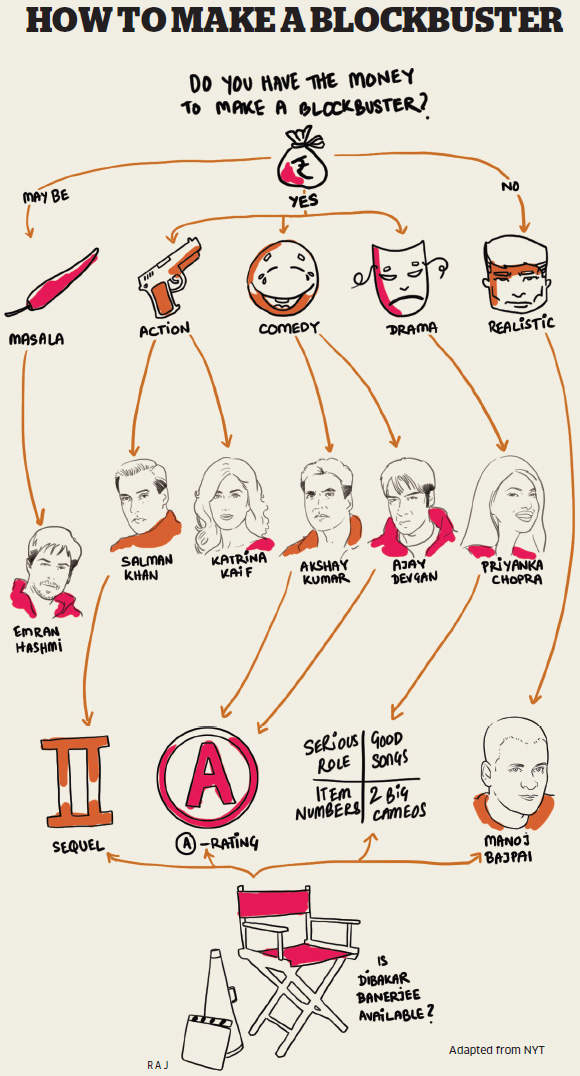 The brightest star in the Bollywood box office constellation in recent times is the movie that collects at least Rs 100 crore. The misses and the washouts are as quickly forgotten as they used to be.

But for bragging rights, nothing short of a Rs 100-crore blockbuster would suffice these days. The handful of movies that scale this milestone — as Salman Khan-starrer Ek Tha Tiger did earlier this week, muscling into the top bracket in a record five days — enter what some trade analysts call an exclusive club.

How did Rs 100 crore come to define box office success? In the good old days of the Hindi movie business, the pinnacle of box office glory was the diamond jubilee, industry lexicon for a movie that played for 75 weeks at the theatres. Today, the diamond jubilee is about as ancient as the era of silent movies. Producers will be mighty pleased if their films survive a second week at the theatres.

The reasons for the trend are simple. One, most Hindi movies are bad; many would be strong contenders in the ‘rotten’ category at Rotten Tomatoes, a website that measures critical opinion of Hollywood movies. There is only once that a viewer can feign interest or attempt a laugh, depending on whether the movie shown is a ‘thriller’ or a comedy’, after paying in excess of Rs 100 for a ticket. For a movie to run to packed houses beyond two weeks, it has to be a great entertainer like 3 Idiots. Else, the hero would have to enjoy the attention of a devoted fan base as vast as Tamil actor Rajnikanth’s that returns to the cinema at least five times.

Second, much like a viewer jostling at the queues for a ticket, a new release is constantly nudging an incumbent to make way. Third, movies are facing tough competition from other forms of entertainment. There were only 40 available weekends for film releases in the first half of 2011 owing to the cricket world cup and Indian Premier League taking up nearly four months.

Yet, today’s producers are laughing louder than their predecessors to the bank. Of the 12 major releases in 2010, there were three blockbusters, four hits and one semi hit, according to boxofficeindia.com. Next year was even better. Bodyguard, Singham, Ready, Ra.One and Don 2 breached the Rs 100-crore mark domestically. The industry took just a year to more than double the count of films in this elite club, according to KPMG India.

What’s the big deal with a Rs 100-crore movie? The question would be rhetorical only if the stakeholders in Bollywood who took this level of earnings seriously were a minority. But Rs 100 crore in net collections — calculated after deducting entertainment tax of up to 50% from gross collections — has become the new gold standard of box office performance to broad swathes of the industry.

Hiren Gada, director, Shemaroo Entertainment, which has produced movies such as Ishqiya and Omkara, says, “All told, such a number is a pointer to the scale of a movie. If someone told me four years ago that Rs 100 crore would become a box office benchmark, I would not have believed him.”

Of course, the earnings of a blockbuster like Bodyguard or Ready are phenomenal because unlike Hollywood movies, audiences seem to be indifferent to the quality of a Hindi film. Amitabh Bachchan’s Mard was one of the biggest hits of 1985; viewers then seemed to have pardoned scenes that had a tiger returning a namaste to the hero’s mother and the hero blowing up an army tank with a couple of grenades.

Nearly three decades later, as Gangs of Wasseypur 2 showed yet again, critically acclaimed films still fare worse than panned ones like Housefull 2 at the box office. Is it heartening to note that our cultural tastes haven’t degraded much? The earnings of these movies are also remarkable because they reach the coveted figure within a week.

Understanding this speed of collections would also offer a glimpse into how the Hindi movie business has changed over the years. The Rs 100-crore collection is essentially a cocktail of a steady increase in ticket prices (an average rise of Rs 10 every six months), the number of theatres and the number of prints (see How Rs 100 crore became a Bollywood Benchmark).

Vijay Singh, CEO, Fox Star Studios, says the good news is a strong theatrical growth has helped the market grow in double digits annually since 2010. “Evidently, every big Bollywood and Hollywood film is opening much bigger.”