Blast from the Past: Mogambo Khush Hua: The creating of Mogambo

Today is Amrish Puri’s birth anniversary. So check out this Shekhar Kapoor article on Amrish Puri writen couple of years ago. 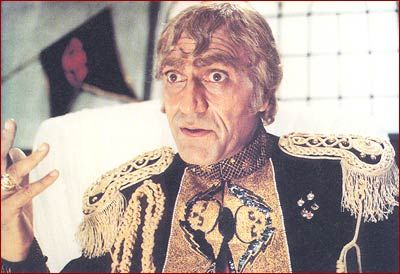 Amrish Puri immortalized the film Mr India through his pitch perfect playing of Mogambo, so much that it’s difficult to imagine the much talked about sequel to Mr India without him.

What’s even more startling is the fact that when you look carefully at the film Mogambo actually does not do much in the film. He talks, he threatens, he clicks his fingers on a globe on his throne, he strides, he builds missiles and threatens to blow up India. He threatens, and he threatens and threatens. But actually does nothing !!  And out of doing nothing he created along with Gabbar Singh from Sholay two of most famous villains of Indian cinema of all time.

At least Gabbar Singh cut off the Sanjeev Kumar’s arms, ruthlessly killed 3 of his men, Killed A K Hangal’s ( Sachin) son and sent the body back to the blind father, and worst of all, made Hema Malini dance on broken glass.

But poor Mogambo ? Nothing but empty threats, other than where he causes a few beautiful looking and well fed kids to go hungry. For a couple of nights. And then to add to his misery, he finally gets beaten up by an impoverished violinist (Anil Kapoor without his power to become invisible). How on earth then did Mogambo become one of the greatest villians on Hindi commercial cinema?

Before I talk about the incredible performance of Amrish Puri, let me give credit to writer Javed Akhtar. I know very few script writers that have such an understanding of how to create mythology through dialogue. It’s no coincidence that both Gabbar Singh (with his then co writer Salim Khan) and Mogambo were his creation. Also to Javed Akhtar’s credit, he completely understood the ‘comic book’ pitch of the film, knowing that in this tongue and cheek film, the villian can be bloodthirsty only in intention, but never in action.

In fact it was I that insisted on the scene where the cute young girl Tina that everyone loved died in a bomb explosion. I was worried that the film would not be rooted and would pass us by as a farce. So I was hoping in that scene Mogambo’s threats would become real and the audience get a sense of real jeopardy. Just today my 9 year old daughter, (who finally caught up with Mr India in her drama class last week), asked me

“why did you kill the little girl , Daddy ? That was so mean”

” I didn’t ” I protested. She dies in the film. Mogambo caused her death.

” But you are the Director, you could have saved her. Why didn’t you ? That was really mean !”

During the making of the film, I remember constantly asking Mr Akhtar if he had nailed down the character that would later become Mogambo. After all we were already begun filming even with scenes of Daga and Teja, Mogambo’s henchmen. I was worried that I could be headed to creating a film that was effectively two separate films. One not quite knowing the other. And then one day Javed Sahib (as we call him) triumphantly said he had written the character, and said the following words to me :

Hmmm, I thought – there must be more to that. There was of course. He lived on island with one ambiton, to destroy and take over India. He was building missiles to destroy India too. But all his grandiose and diabolical plans were completely unachievable unless he threw a group of poor orphans out of an insignificant orphanage in Mumbai. No one quite understood why, and I don’t think anyone cared. For ’Mogambo Khush Hua’ and Amrish Puri’s performance was the predominant defining characteristic of the character called Mogambo.

“Shekhar Sahib, when Kapil Dev hits a six over the grounds, people will shout Mogambo Khush Hua, and when people play three card brag (teen patti) and if they get three aces, the will shout “Mogambo Khush Hua. You trust me on that”. Javed Akhtar assured me. Now this from the man who is responsible for some the greatest one liners of all time (‘Mere paas Ma hai’ from Dewaar) . So I convinced myself he was right. I had to.

Enter Amrish Puri. We had thought of other actors, but it was clear to me (and to others soon) that if there was an actor that could carry of this very very difficult part, it was Amrishji. He was not easy to convince, but then he did not contend with the charm and persuasive power of producer Boney Kapoor.

Along with my team, we set about designing the sets and the ‘look’ of Mogambo. Knowing that each high point of the character in the film would be defined by the words “Mogambo Khush Hua”. How many ways could you shoot the lines, so that at the end of each scene, Amrish Puri would say “Mogambo Khush Hua’ and the audience would react both in anticipation of those lines, loving those lines and also sensing that each time there was a different emotion or style to them. Yes we built a globe along with his throne, gave him rings to click the globe with, used every trick in the book. But finally I knew I would have to depend on the actor. Amrish Puri.

Rarely does an actor so embrace a part and give it life that I as a director could not have imagined. Amrishji asked me how I wanted him to interpret the part. I was nervous. I could not just say “Mogambo Khush Hua” to an actor of his stature, could I? After all this was the same man that had done brilliant performances like the ruthless landlord in Shyam Benegal’s Nishant. And many such films. He had an acute understanding and experience of the art of acting.

So I said “Imagine you are playing Shakespeare to 9 year old kids that have no idea who he was. Imagine you have to make it feel mythic and entertaining”. Amrish Ji got it. Never did I have to give him any more instruction, other than stage directions. Each time he brought a new flavour, a new emotion, a different resonance in his voice. He became threatening and lovable at the same time. Each time bringing something out of the ordinary for those lines that have now gone down in history.

And some time later as I was watching Kapil Dev hit a six over the Sharjah grounds I saw a huge banner go up in the Indian supporters. It said :

Javed Akhtar was right. But we needed all the performing skills of Amrish Puri to pull that one off.  Happy Birthday Amrishji, wherever you are.