Blast from the Past: Feroz Khan Filmfare Interview from April 2001 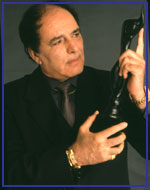 Today is Feroz Khan’s birth anniversary. So check out his Filmfare Interview from April 2001 after receiving the Lifetime Achievement Award.

It’s pouring rose bouquets in the “den”. And he’s enjoying every bit of the Filmfare Lifetime Achievement Award, that was bestowed upon him a week ago.

“I didn’t know I was this popular,” the suave Khan jokes. After a quick confab with his team of writers, he turns his attention to a plate of khari biscuits and moi strictly in that order. And then begins to reminisce about the days gone by.

What does the Filmfare Lifetime Achievement Award mean to you?
Honestly this award means a lot to me. It has made me conscious that my work over a period of time has been appreciated. And that I have been honoured during my lifetime. I was almost in tears when Zeenat Aman handed the award to me. I was choked with emotions when I received the statuette. I remember the first night after I was informed that I would be the receipent of the award this year I just couldn’t sleep. This award is an impetus for me to strive harder.

On hindsight do you think you’ve lived a full life?
I’ve always felt that people who’re scared of death, forget to live. I’ve had a full life. I’ve never planned for the future or brooded about the past, I’ve lived each moment. I’ve had a few problems, some triumphs and some tribulations and I would never trade places with anyone else in the world.

Did you have to struggle a lot to reach this position?
Yes, I’ve had my fair share of struggle. I’ve worked very hard and made use of every opportunity that came my way. When I came to Mumbai I had no money in my pocket, so I used to work at a pool table to make ends meet. I entered this profession a year or two before my younger brother Sanjay Khan did but he became bigger star than I did. I stood out with the other heroes in all the two hero films I did. I didn’t do too many films as a solo hero though.

You had this reputation of being a difficult actor to work with.
True? (Laughs) I’ve never manipulated my roles or tried any other underhand tactics. Though, I must add that I’d been at the receiving end from other heroes. I remember on the first day of shooting of ‘Oonche Log’ Raj Kumar advised me on how to say my dialogue. I turned round and very politely told him, Rajji aap apna kaam kijeeye mein apna kaam karoonga. If I need any help I’ll ask you.” There was no problems between us after that. But believe it or not, he used to do strange things during scenes where he had his back facing the camera. He’d look sideways and say his dialogue. Imagine he’d be giving cues to the wall instead of me. God bless his soul, he was still a very nice guy. Inspite of what other heroes may have done to my lines and role in the films, I never harrassed any of my producers or directors. I can confidently say I’ve not been a difficult actor to work with.

Why have you cut down completely on your acting assignments?
I’d love to act even today. Though I’ve turned down 2-3 films recently. I’m too much of an independent person, when I do an outside film, I feel like a paid labourer. That irks me. I’m my own boss. I need my free time to mull about the movies, write my scripts and make films. I miss acting, of course. Yet somehow the thrill of making movies gives me a great rush. But let me add, if I’m offered a role which appeals to my sensibilities, I’d certainly jump at it.

Do you think you’ve got your due as an actor?
Even though I’ve had many jubilees to my credit, I did not give myself sufficient time as an actor. I switched to direction my talent and focus shifted to other aspects of film making. I’d say I’ve not yet had the opportunity to prove my real mettle as an actor.

Why were you in such a hurry to make films?
Every actor wants to direct but very few have the conviction to actually go ahead and do it. I’ve always had a hole in my head about direction. Also I wasn’t getting what I wanted to do as an actor. It’s only after I made ‘Apradh’, I got main lead roles. I did only those films which I wanted to do, I turned down 2-3 films with Amitabh Bachchan including ‘Hera Pheri’ which went to become a huge hit.

How did you feel when you were labelled India’s answer to Clint Eastwood?
(Smiles) I’ve had a very strong Christian influence in my land. My friends were either Anglo Indians or British. While growing up, I watched a lot of cowboy and western movies, the only Hindi film I had seen before entering this line was ‘Kismet’. I was fond of horse riding and the high-life and I tried to infuse my style in my movies. If people want to label me as Cowboy Khan, then it’s okay by me.

So did that make you something of an outsider?
It wasn’t easy for me to adjust to the ways of the industry. I’ve always been a loner. I enjoyed my own company rather than spending time with not-so-like minded people. I’ve been away from the industry because I just didn’t feel comfortable with a lot of people here. (Laughs) I feel I should interact with the media more after this coveted award.

You been called wild, suave, hot-tempered, flamboyant? Which description suits you best?
I don’t care about good-looking label, I’ll say I’m pleasant looking. I’m still hot-tempered but now I’m like the soda bottle. My anger is only momentary. You mellow with the passing years. I feel the only answer to deal with life is laughter. I’ve started laughing lots more these days.

You’ve also enjoyed the casanova image for a long time.
Let me just say, that I used to know a lot of pretty girls in my time. I’ve had my share of wild days and wild temper. The best way to describe myself would be the phrase: I’m a man amongst men but better amongst women.

Would you say you are a difficult man to live with?
I’m a Libran, so I’m very well balanced. I like everything to be neat and tidy. I’m artistically inclined, that’s it. I’m not difficult otherwise.

Fardeen seems to be in awe of you.
He’s a great lad, probably he’s in awe of me… We are verrry close yet at the same time we give each other the space. I don’t invade his privacy and he doesn’t encroach into mine. I’ve explained things to him and we’ve discussed every aspect of life be it his profession, women or sex.

Some time back there were rumours of friction between your brothers and you. Comment.
There’ve been moments of love-hate between us but this happens in every family. There’s nothing unusual about it. In life, you can choose your friends but you cannot choose your brothers. Even today among the five brothers few are talking and few are sulking with each other. That doesn’t mean we don’t love each other. I can vouch for the fact that there’s no jealousy amongst us. I was in charge of my family for a long time and the others look upon me as a father figure. We’ve had our differences but we’ve always got back together. (Laughs) All five of us are hot-headed and this trait I think we’ve inherited from our father, it’s the Khan legacy.

What’s been the biggest disappointment in your life so far?
I wanted to make a succesful film with my son but it just didn’t happen. I thought I used all my expertise in Prem Aggan but it didn’t work. My stand was vindicated when he got the Filmfare Award for Sensational Debut. His work was appreciated. Fardeen’s hardwork has paid off. He’s a real stallion. I only wish I had made a succesful debut film for him but I’ve shrugged it off and moved on.

What gives you a high?
I’m high on life.

Any regrets?
I’ve smoked away my life but now I’ve given it up and am very proud of it. Other than that, I’ve no regrets.

What are your future plans?
There are two films on the cards. There’s definitely more pressure on me to make a film which will be appreciated and at the same time will be a commercial success.

What would you like your epitaph to read?
Love and live