Blast from the Past: Anil Kapoor’s Filmfare Interview from 2000

As the frames of Sudhir Mishra’s rivetting under- production film unspool on screen, I’m hooked. One more time. Mercifully, Anil Kapoor’s roles never make him look like he’s being used to sell some kind of high-tech body building equipment or underwear for men. Look closely at his career path and you realise that AK’s work is held together by a glue which is a mix of guts and glamour. Clearly, he’s had to work with considerable imagination to flesh out the characters in his recent films be it the the do-gooder Avinash in the regressive Hamara Dil Aapke Paas Hai or the rake Rajeev in the flacid Karobaar. It’s Mr Kapoor who says yea or nay to everything, right down to which of his publicity stills are used and where and when he makes personal appearances. The interviews he does are dispensed like prasad. He’s not being aloof, only selective; he cares. After some dozen inter-wows with Anil, I’ve realised: Just don’t try to pin him down or matters dark, sad or angry. He won’t hold still long enough. He bops and jostles through conversations and changes subjects so adroitly that hours and sometimes days pass before you realise that you’ve been had. Yet, he chummily takes every jibe of mine on the chin. And answers my questions as politely as possible. Which goes something like this.

Sudhir Mishra’s film really looks promising?
Yeah, Sudhir will make a good film. He gives me the similar kind of vibrations, Shekhar Kapur gave me after the first schedule of Mr India. Of course, later all Shekhar and I did was to bark at each other.

I thought Hamara Dil Aapke Paas Hai was regressive?
Really? I thought it was progressive. We were trying to say that even a rape victim can lead a normal life. Perhaps we ODied on the comedy track. But that was for our target audience– the common man in Yavatmal. And finally, the film is a huge hit. It’s done very well overseas. Except a few centres, where collections steadied after the first few days, the film is a hit everywhere.

You must be having the last laugh, now that Mukesh Bhatt has signed you for a film after blasting you all over.
What last laugh? Mahesh Bhatt, Mukesh and Vikram had a slight misunderstanding with me. That’s been sorted out now. It’s easy to fight and bark at each other but more difficult to be friends once more. You have to be a man to do that. Re-building a relationship is more difficult than ruining it. 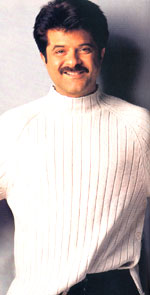 You’ve been hurt often, no?
I feel hurt. But let me tell you one thing. Whoever has hurt me, has come to a very bad end. Some of them have come crawling back to me for forgiveness.

Was Pukar an economical way of film-making?
I look at it like this.Pukar’s one of the best films– technically and in terms of performances this year. No two about that.

When was the last time you compromised with a role. Did a thought ever cross you: I’ll do this film so that I can build a swimming pool and personal gymnasium in my house.
Never. The only time I felt compromised as after the debacles of Prem and Roop Ki Rani… Then I needed to do some faltu films to keep the home kitchen burning. I’d love to make money only so that everyone whom I love is never in distress.

Does the profession make you some sort of control fiend? Like setting up a production house.
I’d be denying, if I said that I don’t want to be in control. But we’re just copying the West. Be it Mel Gibson, Michael Douglas or Clint Eastwood, ultimately they all end up directing their own films or starting their production houses. Nothing wrong with that. If actors here cannot fulfill the demands of acting as well as being producers, they shouldn’t try. I remember Subhashji (Ghai) and me advising Jackie (Shroff) against turning producer. He’s the sort to get conned easily. Which he was. But now after several hiccups, he’s on roll. Good for him.

Everyone says that Hrithik Roshan is as fastidious and obsessive as you are.
(Laughs) Actually Hrithik himself told me that his style of working is a lot like mine. Chalo, at least he’s in good company. He has an amazing presence. It’s difficult to believe that Fiza was just his second film. Secondly, what will hold him in good stead is the fact that he doesn’t drink exercises. I remember even as an assistant director, he was very sincere. That quality has remained. Know something? I wish I were as good- looking as Hrithik. Now the challenge begins. After yor first film is a superhit, you can go with the flow for another couple of movies. The hysteria sees you through. Then you have to develop your own identity. You have to get down to brass-tacks. Then no amount of breeding or bloodline helps. Hrithik’s struggle to keep his sanity and hold his own as an actor has only just begun. I hope he stays rooted ever.

Have you ever wondered what you were doing on the sets of a particular film?
Ya, sometimes. I was doing this film called Benaam Badshah. I kept telling the director not to have so much abusive language in the dialogue. Once on the sets of another film, I was made to do obscene dance gestures. The heroine burst into tears. At such timees I’ve felt helpless. In that sense, I feel actors have a responsibility. After all, they are role models to a very impressionable public. You know what’s really sad is when you outgrow the people you have worked with in the past. Breaking away becomes difficult, but you have to let go. But in that sense, I subscribe to Amitabh Bachchan’s philosophy: Now that I’m on the sets, it’s my duty to complete the film. And convincingly. At the risk of sounding immodest, you can never accuse me of sleep-walking through my most raddi films.

What about two hero films, aren’t there too many ego clashes?
I must have done the maximum two hero films. I just feel the director must control the actor and not vice-versa. Very often, in two hero films the script keeps changing. Why? Just because the director wants to pander to one of the heroes who is suddenly hot at the box-office. That’s scary. There are a lot of directors like that who get their films completed on the sheer strength of chamchagiri.

What about the chauvinism in the industry? Forty-plus want to act with heroines twenty years younger?
What’s wrong with that? It’s another way of re- inventing your persona. And the public likes to see newer pairs on screen. (Laughs) As much as they would like to believe, my heroines are not twenty years younger than me. That’s wishful thinking. Doesn’t Michelle Pfeiffer at forty work with younger heroes?

So what’s the latest info on your fave Madhuri Dixit?
Madhuri’s opened up so much after her marriage. She’s become more communicative. In fact now, I feel we are on the same wave-length. She cracks many more jokes now. Mr Nene has been good for her.

You’ve seen actors becoming parodies of themselves?
I see it all the time. Stardom is really vicious. People begin to isolate themselves, they become control freaks. It’s really sad. I see some actors behaving brattish, just as an extension of “image” thing. Which is why to be a good actor, you must have, what shall I call it, a wetness. Other actors dry up easily. I’d like to think that I still have that wetness, that fire. Which has kept me going. I’m still learning. And I feel one lifetimes isn’t enough.

Your wife is like the bulwark of your life, no?
Ya, that she is. And she’s happy doing her stuff, like running Idea-her health club, plus she’s really brought the kids up well. I’ve been a bad father. Being out of town 20 days a month. But she prefers to be away from the public glare. I really think she’s a super-achiever. But she doesn’t want to make it to the cover of a film or women’s magazine. That’s not her priority. When I met Shivaji Ganeshan Sir recently, I was really amazed at the way his children had turned out. He told me that some where, I had to stop and make my family my top priority.

You feel side-lined when a on-film wonder steals the limelight?
Never yaar. I’ve survived action heroes, romantic heroes, pin-up boys, muscle-men, the works. And honestly, tell me, is there any other actor, other than me who has consistently given good performances in the last five to 10 years?