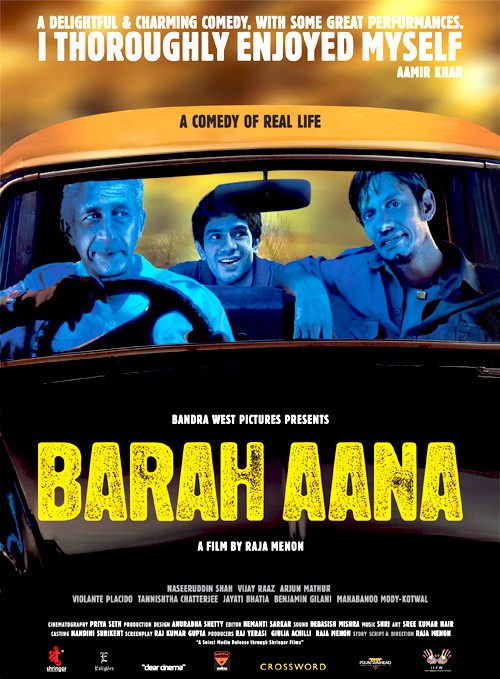 Barah Aana is the story of three honest, struggling friends trying to make a living in the city. Shukla (Naseeruddin Shah), a driver, is constantly insulted and treated like dirt by his mistress. Yadav (Vijay Raaz), a watchman, is treated like a peon and made to run errands. Aman (Arjun Mathur), a waiter, wants to marry a firang girl. Desperation and grief lead Yadav to hit back and he accidentally gets them involved in a kidnap. This changes him and he convinces Aman and Shukla to join him in kidnapping for small ransoms. Shukla, having had enough with his mistress, plans on the big one that would change their lives forever. Will they succeed is what the rest of the movie is about.

Naseer is brilliant as always. He doesn’t have that many dialogues but conveys his emotions through his facial expressions. Vijay Raaz has the meatiest role of all and gets to showcase his talent. It seems though that he is getting typecast as the poor guy in all his films ala Monsoon Wedding and Yuva. It would be good to see him in a rich guy’s role for a change. Arjun Mathur gives a good performance as the waiter who is after a firang girl. His broken english is really good. Tannishtha Chatterjee excels in the limited screen time she gets as the phone booth owner who has a crush on Aman. Violante Placido is ok as Kate, the conning drug dealer. Jayati Bhatia is good as the arrogant mistress.

The movie has an interesting premise but it is let down because of bad screenplay. It is very slow at times and some of the scenes where Vijay Raaz and Arjun Mathur are having discussions are just not interesting. Aman’s protestations at Yadav having landed him in trouble don’t seem genuine when he has no qualms taking the money from him. Naseer participating in the first kidnap also seems unrealistic when he is shown as a man of integrity in a scene before. The ending is just lame. Shukla and Yadav still remaining friends after everything is just ridiculous.

The movie is supposed to be a comedy but there is hardly any comedy. The movie should have been set up as a thriller and it should have had crisp editing but the movie drags on. Raja Menon’s direction is mediocre. He succeeds in getting good performances from the cast but fails to keep the movie interesting. You can guess the plot once the incident happens. The movie seems long even though it is just 97 minutes long with no songs in it.