Anushka Sharma Interview on The Front Row with Anupama Chopra 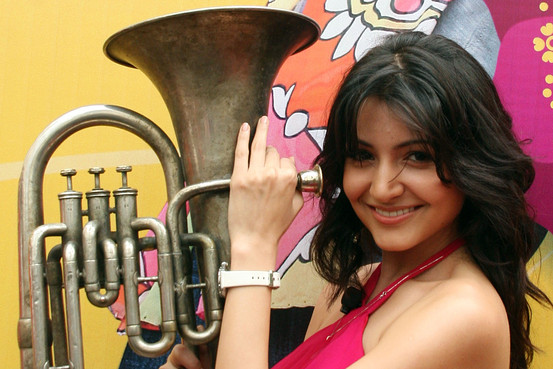 Anushka Sharma has rapidly ascended Bollywood’s A-list. She is currently juggling projects with some of the biggest names in the Hindi film industry – Aamir Khan, Shah Rukh Khan, Ranbir Kapoor and Imran Khan.

Here is an edited transcript from her conversation on “The Front Row with Anupama Chopra.”

Anupama Chopra: Anushka, let me start with an honest admission. When I first saw “Rab Ne Bana Di Jodi,” I had a very lukewarm response to you and I think I wasn’t the only one.

Anushka Sharma: A lot of people did.  Actually, I’m really glad that you’re saying this because after “Band Baaja Baaraat” a lot of journalists kept telling me that you hit big time right after your first film and I had to actually correct them and say: “No, listen, that did not happen. I did not turn into an overnight star like other people did.”

Anupama: The film did well but there wasn’t so much raving about you. You didn’t pick up many best debutant awards and suddenly everybody woke up to you in “Band Baaja Baaraat.” But, between “Rab Ne Bana Di Jodi” and “Band Baaja Baaraat,” how did you keep that faith?

Anushka: There was some quiet confidence I had inside me, somewhere. I don’t know from where it was coming. That is the only thing that kept me hanging there. I actually thought I would grab all the best debutant awards and honestly after one award I really cried. I was in the car with my mother. Asin was the one who actually grabbed all the awards that year. I had done the calculation and I thought that okay so, “She did get an award for “Ghajini” in Tamil in the south industry so obviously they will not give her a debutant award here.”

Anupama: You had it all figured out.

Anushka: Yes, I was so naïve. I was sitting and making these calculations. This toh pakka (for sure) I’m going to get but I didn’t, so I felt very bad. In fact everybody else actually got this scroll, like Prateik (Babbar), for being a newcomer. I didn’t even get that so I was like: “This is terrible.”

Anupama: In an interview you said: “I can act the pants off all the heroines in Bollywood except Kareena Kapoor.” Now, that’s a pretty cocky statement to make. How are you so sure?

Anushka: Yes I’m just cocky (giggles). No, I don’t think that I can act the pants off everybody else but at that point when Karan (Johar) asked me that question…You know how when you edit shows,some things seem very odd but that is not actually how the conversation flew. He actually asked me, “Do you think anybody else would be able to do ‘Band Baaja Baaraat’ at that time?” So I said: “No, I think I did what I thought was the best I could do.”

Anupama: Do you believe that you can act the pants off anybody?

Anushka: No, because today I’m observing that there are so many girls. Parineeti (Chopra) has done “Ishaqzaade” and she was really good in that film. Deepika (Padukone) has done really well in “Cocktail,” which is actually really nice because it makes you want to do better.

Anupama: It doesn’t make you insecure?

Anushka: No, it doesn’t. In fact, even if it does make you insecure it’s the way you treat that insecurity. It’s the way you handle it. The way I see it is, “Fine I did well in Band Baaja Baaraat but that’s it. Now I need to prove myself in another way.” So if other actresses are performing really well then I have to up my game.

“Yes I am doing a film with Katrina Kaif, but I know my place.”

Anupama: And you take that in the right way and you work harder.

Anushka: I do, exactly. I have to and I also don’t feel odd or I don’t feel insecure. I can pick up the phone and call someone and say, “You know I loved your performance.”

Anushka: Not at all. I’ve done two films. In one film there were three other actresses (“Ladies vs Ricky Bahl”) and now I’m doing Yash Chopra’s film with Katrina Kaif who is one of the biggest stars in the country.

I do have moments when I feel insecure. I do have moments when I feel jealous and that’s normal. It’s a very normal emotion. It’s your action and your attitude and your reaction to that that is important. So my reaction is that, “Yes I am doing a film with Katrina Kaif, but I know my place.” See I value myself and I will not be okay with anybody undervaluing me. I will not overvalue myself at the same time. So I know why I’m doing Yash Chopra’s film, because I have a role that comes full circle. It gives me satisfaction. I finished the film thinking I was happy doing this.

Anupama: But Anushka isn’t it intimidating to work with somebody as beautiful as Katrina Kaif?

Anushka: If I was a guy then I’d be intimidated by her beauty (laughs). I won’t be able to stand opposite her and would think, “Oh my God she’s so beautiful, I have forgotten my lines.” But no, it doesn’t matter because I like men.

Anupama: Can you tell us anything about “Bombay Velvet” and “P.K”? What can you reveal at this point about these two very anticipated projects?

Anushka: I can tell you about P.K. –  it’s the best script I’ve ever heard ever. I remember when Raju Hirani was narrating the script to me I started crying because I was sad, I was crying because I was happy. I’ve actually never seen a film so clearly, so visually during a narration.

And I’m just so grateful that Raju Hirani considered me for his film. He’s one of the best filmmakers of our country. He is such a simple man, his films are filled with goodness and simplicity, I love such films and I think it’s going to be a kickass film.

Anupama: Now when you look back at that girl who cried coming back from the awards because she didn’t get any and then you look at this kitty of films and these actors you’re working with, these directors who wanted you and have cast you, how do you feel?

Anushka: I feel very fortunate. At the time when people were telling me to do a lot of films and I was not doing that everybody was telling me that you’re silly, you should be seen more at parties and you should do PR.

I didn’t want to do all that because I will never do something that I’m not convinced about. I’m just happy that I didn’t get lured by many other things. I stuck to my convictions and it just makes me believe in myself a lot more.

Anupama: Good for you. Thank you, Anushka.