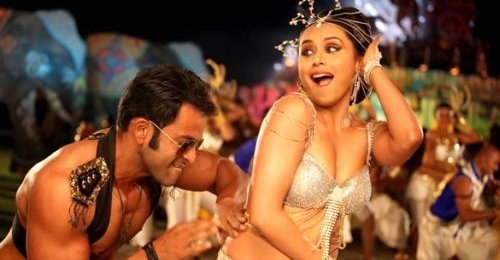 It’s love at first smell for college librarian Meenaxi Deshpande (Rani Mukherjee), who falls hook line and sinker for brooding artist Surya (South Indian star Prithviraj) the moment she first catches a whiff of him. Meenaxi, the protagonist of writer-director Sachin Kundalkar’s bizarrely fascinating Aiyyaa, is a middle-class Maharashtrian girl with a heightened sense of smell, and a tendency to slip into a dream-like fantasy world of Bollywood numbers to escape the claustrophobia of her eccentric family.

To be fair, no one’s entirely sane in Kundalkar’s world – not Meenaxi’s kooky parents, not her blind grandmother who zips around in a mechanical wheelchair, and especially not her colleague at the library, a buck-toothed Lady Gaga lookalike who dresses in S&M gear and pines for John Abraham. Meenaxi herself is prone to melodramatic outbursts and filmi nakhras, particularly when she’s being paraded about in front of prospective grooms.

Aiyyaa, with its bright visual palette, its strong female perspective, and its intentionally peculiar humor, is evocative of Almodovar’s quirky cinema, but the plot here is wafer thin, and while some elements work, it never all comes together as a satisfying whole. It certainly doesn’t help that the film unfolds over two hours and thirty minutes…an excruciatingly long running time for what’s essentially a slim story of a one-sided crush.

Yet, in a rare twist for a Bollywood film, it’s the heroine who does all the lusting here, cooking up saucy imaginary scenarios that invariably involve the hero flaunting his well-toned physique. Sportingly offering himself up to be objectified, Prithviraj bumps and grinds and heaves to the beats of at least two deliciously over-the-top song sequences.

Meenaxi, of course, is the film’s juiciest character…a woman conflicted between pursuing the man of her dreams, who barely notices her, and settling for a simple guy with simple tastes who has picked her to be his bride. Rani Mukherjee owns the part with a tremendous, uninhibited performance, switching superbly between the film’s exaggerated and understated moments.

In the end — the impressive camerawork and Amit Trivedi’s winning tunes aside — Aiyyaa is at best an original and promising experiment let down by its many indulgences. I’m going with two-and-a-half out of five for director Sachin Kundalkar’s Aiyyaa; an unusual film that could’ve been so much more.