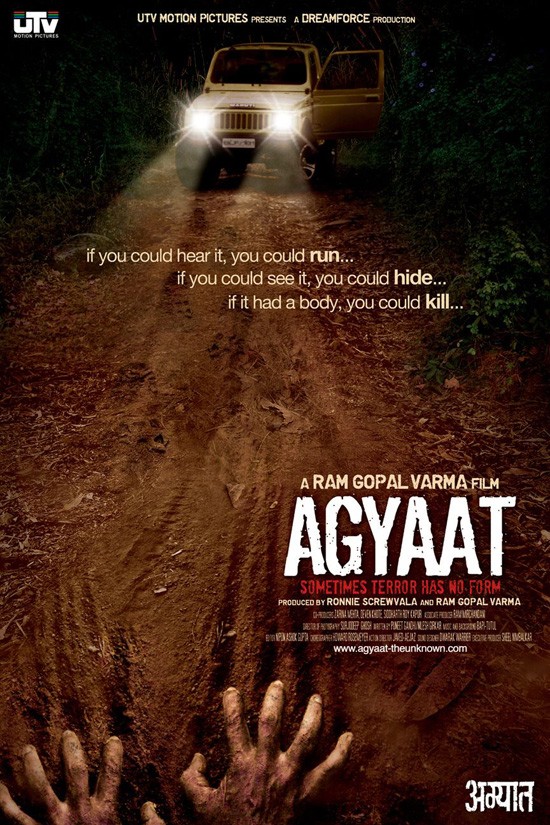 Agyaat borrows from Predator, the TV serial Lost and a bunch of other B movies. A film unit, shooting in a forest, goes on a camping trip when their camera breaks down. Setu (Joy Fernandez), the guy who knows the way out of the jungle gets killed and the rest of them do not know the way out. Meanwhile each member of the unit keeps getting killed by some unknown predator. Will they be able to safely escape the forest is what the rest of the movie is about.

For a horror/thriller movie there is not a single scene in the movie that scares you or gives you any adrenaline rush. The characters are loud and annoying. Gautam, the hero, is arrogance personified. The action director always wants to fight and Ashaji (Priyanka Kothari) is a gentle lady who does some Yoga so that the camera can voyeuristically capture every part of her body. The Kanjoos producer is an “Aiyoo Aiyoo” South Indian. The director thinks too highly of himself. Almost everyone is eccentric except for the leading pair. The characters are so annoying that the viewers would not mind their getting bumped off. To top it there are cheesy lines like “Tum Apne liye na sahi, Apni Maa like koshish karo” and deliberate mention of “Agyaat” a few times to justify the title.

For a movie that is close to one and a half hour there are a few songs too. The first song’s picturization is like that of a Telugu song and that too of a late 80s / early 90s type. The songs are bad and the cinematography is nothing great. Nitin Reddy, the Telugu actor makes his Hindi debut but has a Telugu accent when he is saying English lines. Not sure if his Hindi lines were dubbed. Priyanka Kothari can’t act and she exposes as much as she can. The rest of the cast are all extras who are just there to get bumped off.

Ram Gopal Varma needs to stop with this film in film thing. He already made a Rangeela and took potshots at the director and producer and he already made Raat/Bhoot and tried to peddle that “Science does not have all the answers”. How many times do we need to be reminded of that? His camera techniques which once looked different have now become monotonous with camera placed down below or following someone or someplace only to find that there is nothing. One does not need stars to make a good movie but one cannot take bad actors and make a good movie with them. The tag line says “You can’t escape the unknown” but you can surely escape this.