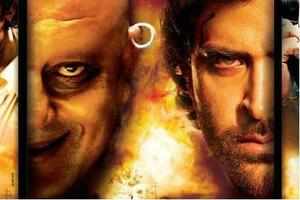 Amongst the first recall values for the original Agneepath is Amitabh Bachchan’s trademark self-introduction dialogue of Vijay Dinanath Chauhan. While evaluating its official remake, the first thing that crosses your mind is how the reinterpretation of this signature scene would be. Unlike in the original, the monologue plays pretty late in the remake, whereby it establishes Vijay’s identity over merely introducing him and with such individuality and elegance that it pays a perfect homage to the original, while at the same time not blatantly imitating it. That is how a remake is supposed to be! Retaining the spirit of the original and having a soul of its own. This dialogue kinda summarizes the overall aura of the remake.

The basic backdrop remains the same. Kancha Cheena (Sanjay Dutt) is the uncrowned king of Mandwa Island and terminates the rebellious village schoolmaster. The master’s son swears revenge and grows up to be Vijay Dinanath Chauhan (Hrithik Roshan) under the wings of Rauf Lala (Rishi Kapoor). Lala who trades in human and drug trafficking, rules the Mumbai underbelly. Vijay uses Lala to reach Kancha and thereby reclaim his island and self-esteem.

While the primary plotline remains the same as Mukul Anand’s classic, director Karan Malhotra along with co-writer Ila Bedi Datta refreshingly revamps the screenplay giving it a new structure and approach. So you never miss the omission of Mithun Chakravarthy’s award-winning Krishnan Iyer from the original and welcome the induction of Rishi Kapoor’s foul-mouthed and despicable kasai character. If at all the film falls into predictable zone, it’s not because you are familiar with the original but because at the core of it, the story remains a basic revenge drama. The film employs the age-old conflict of a reformist school-teacher versus the conniving zamindar, duping the villagers of their lands.

The remake isn’t essentially remodeled to modern times because the film retains its original era thereby reviving the raw essence of the 1990 film. And beyond the epoch, Malhotra also imparts the cinematic treatment of that time period to his film. So both the villain and hero have stylized entries, their confrontations boast of high-voltage drama and, in the climax, when the bruised and battered protagonist rises to take revenge (in exactly the same manner like his father was killed), he wins instant applause. Also the idea of Vijay concealing his identity from his teenaged sister is so intrinsic of the era (a la Anil Kapoor’s Jeevan Ek Sanghursh).

Where the new Agneepath raises the bar is by casting Sanjay Dutt as the baddie. In his black-attire and bald-look, Dutt has such solid screen-presence that the director makes things difficult for himself with a challenge of how would Hrithik’s hero overpower the villain. Thereby the film employs some extreme action, which is more brutal than boisterous, to justify Kancha’s imposing persona and the subsequent seethe in Vijay’s revenge. Thankfully, what puts Agneepath a notch above the recent mindless actioners is that it has a basic human connect which it reasonably balances with the extreme action and never blatantly exploits any emotion.

Piyush Mishra’s dialogues are impressive with rhetoric punches every now and then. And even when the lines go unrefined for Rishi Kapoor’s crude character, it leaves immense impact without crossing the familial domain. Cinematography by Ravi K Chandran and Kiran Deohans is remarkable. Akiv Ali’s editing is accomplished and despite the film having a three-hour runtime, you never lose the narrative for a moment. The only slacker is the obligatory romance track (Priyanka Chopra) but thankfully even that is kept short. Ajay-Atul’s music and esp. the background score are effective. Abbas Ali Moghul’s action is raw and unrestrained.

Beyond his hold on the subject, Karan Malhotra succeeds in extracting inspiring performances from the impressive cast. The usually suave Hrithik Roshan convincingly glides into his coarse character here and has a towering presence. He completely redefines Vijay Dinanath Chauhan and never in his act do you see even a glimpse of the original. Sanjay Dutt reeks of menace and malice through his sadistic laughs. At times he overdoes his guffaws but therein lays his strength, which he uses to the hilt. Rishi Kapoor has never looked or played so mean onscreen before. As the kohl-eyed Rauf Lala, the affable actor reinvents his screen image with a beastly streak to his character. So good is the actor that you never get enough of him. Arish Bhiwandiwala as the young Vijay Chauhan puts in a confident act. Priyanka Chopra, Zarina and Om Puri are functional.

With Bollywood being obsessed with remakes in recent times, Agneepath is an important lesson on how to pay proper tribute to the original. Despite the original being his home production, Karan Johar attempts playing with fire (treading uncharted territory) with Agneepath and emerges victorious. Agneepath has the fire for a lustrous entertainer!