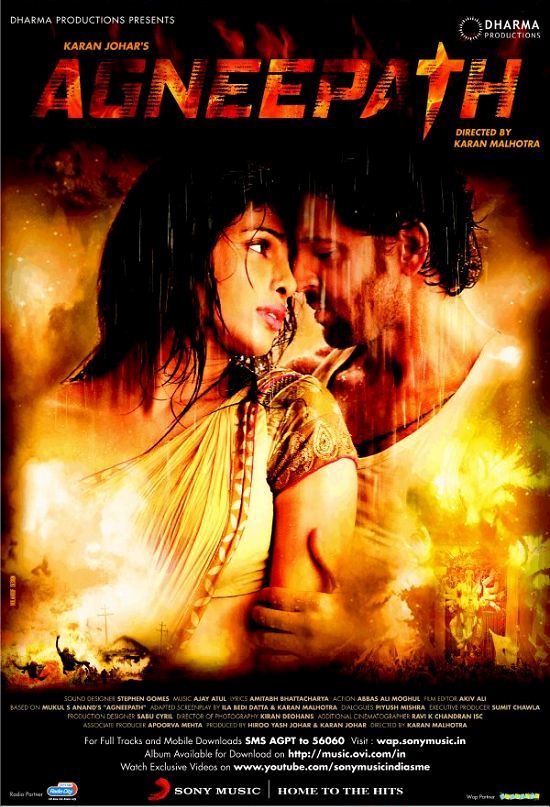 In a small Indian village Mandwa, Vijay Dinanath Chauhan (Hrithik Roshan) is taught by his principled father about the path of fire – AGNEEPATH. His life is completely shattered when the evil drug dealer Kancha (Sanjay Dutt) hangs his father to death. Vijay leaves for Bombay with his pregnant mother and has only one mission in life- to come back to Mandwa and bring back the glory of his father’s name. In Bombay, 12-yr-old Vijay is taken under the wings of the city gang lord Rauf Lala (Rishi Kapoor). Vijay finds support only in his best friend Kaali (Priyanka Chopra), who stands by him at every moment in his life. Fifteen years later his hatred for Kancha takes him back to Mandwa where life comes full circle.

The new Agneepath is nothing like Scarface. It is basically an adaptation or re-working of the old Agneepath. It borrows the main plot and a few main characters while adding new characters and new situations. Some of the scenes stand out like the scenes involving Master Dinanath Chauhan being killed or the scene where Vijay commits his first crime or the fight scene between Vijay and Rauf Lala or the final fight scene between Vijay and Kancha. Vijay saying out his full name scene is done very well too. The best scene of the movie is the betrayal scene which is Maqboolish in nature.

The first half is almost perfect but the second half has a few scenes which were not needed or could have been edited out. There is a ridiculous scene where Vijay is beaten up by Kancha for asking Mandwa. There is a whole Gun Gun Guna song which should not have been there or should have had only a few lines of it. Hrithik seems to be in a state of drunkenness one moment and fine the other. There is also a brother-sister song which could have been avoided. While the dinner table scene is itself good there is a scene immediately afterwards with a sobbing Vijay which was again not needed. The stabbing scenes in the final fight should not have been avoided.

Screenplay by Ila Bedi Datta and Karan Malhotra is quite good except for the above mentioned scenes. Dialogues by Piyush Mishra range from very good to mediocre. The dialogues given for Rauf Lala’s character are excellent while the ones for Kancha are disappointing at places. Cinematography by Kiran Deohans and Ravi K Chandran is excellent. Art Direction by Sabu Cyril is excellent. Great effort has been made to recreate Mumbai from the 1990s and the whole Mandwa setting is inspired from the movie 300.

Background music by Ajay-Atul is good at places but it mostly way too loud and may cause headache to some. Chikni Chameli is obviously the chart-buster song and has been choreographed really well. Gun Gun Guna, Saiyyan and Abhi Mujh Mein Kahin songs are mediocre to decent and should not have been there or used only in bits. The qawwali Shah Ka Rutba is quite good and is picturized very well with the backdrop action. Deva Shree Ganesha song is good too.

Hrithik Roshan is very good as Vijay. He does not try to copy Amitabh from Agneepath or Al Pacino from Scarface. He plays it more like the silent brooding type. There are a few scenes where its hard to make out what he is saying especially when he is reciting the “Agneepath” poetry. Priyanka plays a loud character and she acts well with somewhat different mannerisms. She however does not look good in closeups with all the work she has got done. Rishi Kapoor is brilliant as Rauf Lala and plays the character to perfection. Sanjay Dutt is excellent as Kancha. He looks menacing with his bulky frame and looks totally creepy. His performance resembles his Khal Nayak performance a bit but this one is totally dark with no redemption. Zarina Wahab, Om Puri, Chetan Pandit, Sachin Khadekar, Rajesh Tandon all pitch in with good performances. Arish Bhiwandiwala, who plays the child Vijay and Kanika Tiwari who plays Sakshi are good too.

Karan Malhotra’s direction is very good for the most part and this is an excellent debut. The good thing about him is that he does not try to copy Scarface or the old Agneepath but gives the movie his own unique vision. The movie is very intense and relentless. It can be exhausting to a lot of people because of its almost 3 hour running time and also because it has no comedy in it. All those who love the old Agneepath and Amitabh’s perfomance in it will most likely not like this one. And those who have not seen the old Agneepath or are more open to adaptation will probably like this.