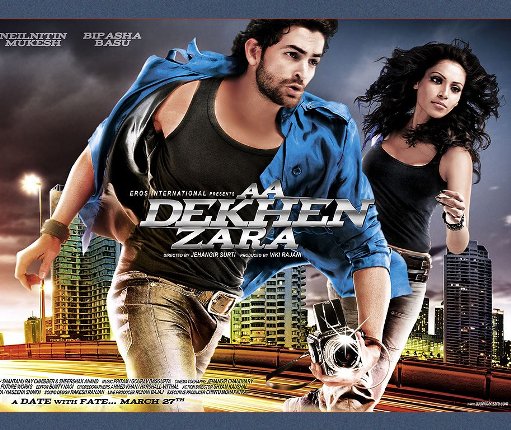 Ray Acharya (Neil Nitin Mukesh), a struggling photographer, inherits a special camera from his grandfather. The pictures clicked from the camera, when developed show the future of the people in the pictures. He saves Simi(Bipasha Basu), a DJ at a club with the help of the camera and uses it to make money through lottery, horseracing, betting and so on until the cops and a goon, Captain (Rahul Dev) are on his trail looking for the camera. On top of it, he finds out that he’s going to die in a week’s time. Will he able to escape or will he die is what the rest of the movie is about.

Some scenes are good like the one where the kids tease Neil when his bike doesn’t start up or the one where the mother and child fall off the giant wheel or the scene where they jump off the building (though their falling into a swimming pool is ridiculous and cliched). The visual effects are good.

Some scenes are cringe worthy like the scene where Neil finds Rahul Dev and is trying to run and Bipasha is all cool asking him why he is panicking when she is the one who tells him that they have to run away. There is no logic or consistency. At first Neil just takes pictures of the next day and then he is taking pictures 5 days ahead. The scene where Bipasha is shown getting jealous of Sophie even after finding out her identity is ridiculous and whats puzzling is that Neil doesn’t look for anything else in the bag till the end (allowing for a sequel).

The movie has an interesting premise but bad direction and horrible acting make the movie laughable. Neil Nitin Mukesh is ok in the initial scenes but his performance is not convincing enough. Bipasha can’t act and is annoying and is almost reprising her Bachna Ae Haseeno role. There is no chemistry between them and they never look like they are in love or anything. Infact it looks like they are just fighting all the time. Rahul Dev is good and seems to be different with his dialogue delivery but his role should have been given more edge. Sophie Choudhry has hardly any role to talk about. The guy who plays the cop is horrible.