This is an excellent article by Sukanya Verma. 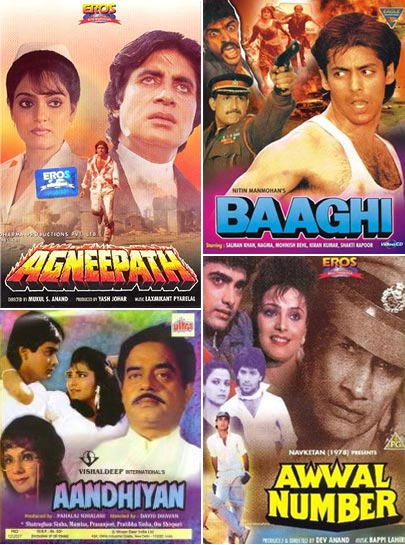 A year when two significant films — Aamir Khan’s Dil and Sunny Deol’s Ghayal — dared to release on the same date and went on to become the highest grossers of the year.

It is also the year when:

Salman Khan paraded in a two piece bikini for a ragging scene in Baaghi.

Yesteryear actress Mumtaz made a disastrous comeback in the David Dhawan flick, Aandhiyan.

Sunny Deol flexed his vocal chords to yell the B-word on big screen.

Madhuri Dixit emerged as the entertainer of the year with 10 releases and three super-hits — Dil, Kishen Kanhaiya and Thanedaar.

A sexagenarian Dev Anand directed his 11th film against the backdrop of cricket. He would go on to direct eight more.

For a change, supporting actors Kader Khan and Shakti Kapoor took forefront in and as Baap Numbri Beta Dus Numbri while leading man Jackie Shroff was relegated to the sidelines.

And Amitabh Bachchan changed his voice to embody the curt spirit of Vijay Dinanath Chauhan. Two decades on, current rage Hrithik Roshan is all set to recreate this iconic character with its reboot, produced by Karan Johar and co-starring Rishi Kapoor, Sanjay Dutt and Priyanka Chopra. 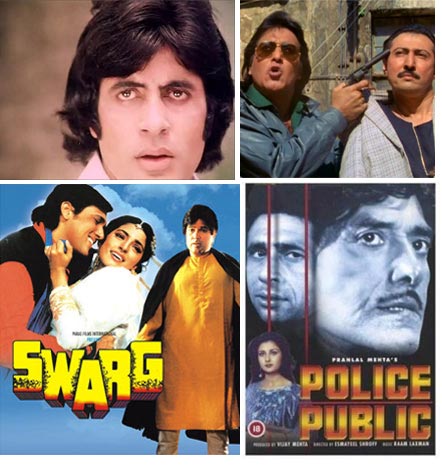 Unlike 1978: The Year of Don, 1990 wasn’t about the angry young man, now nearing middle age. His superstar was never in question but a brand new generation of actors — Anil Kapoor, Jackie Shroff, Sunny Deol, Govinda, Sanjay Dutt and the Khans, Aamir and Salman, were now hungry for his throne.

Even though Big B’s gritty act in Mukul S Anand’s Agneepath made everybody, including the National Awards jury, applaud in acknowledgement it didn’t translate to box office collection. He did make good with K C Bokadia’s Aaj Ka Arjun, a standard revenge saga that worked purely on the charisma and clout of the country’s beloved icon.

Colleagues like a fit-looking Vinod Khanna romanced heroines half his age with elan in Jurm and CID whereas Dharmendra and Shatrughan Sinha lost the plot in mindless action flicks that reduced them to jaded caricatures of their once glorious selves. Meanwhile, Jeetendra (Thanedaar, Hatim Tai) and Mithun Chakraborty (Agneepath, Gunahon Ka Devta) went on an inane signing spree with nearly a dozen releases each.

During this senseless phase, Raaj Kumar, alongside Naseeruddin Shah, reigned supreme in the whodunit Police Public with his trademark dialoguebaazi and inimitable style. On the other hand, Rajesh Khanna scored a surprise hit playing a self-sacrificing big brother in the David Dhawan melodrama, Swarg.

Sunny Deol came into his own with his raw, uninhibited performance (and bulging biceps) as the angst-ridden boxer seeking justice for home production, Ghayal. It fetched him a well-deserved Best Actor trophy at Filmfare Awards. Interestingly, the actor is currently filming a sequel of this action-packed classic that introduced Bollywood to the brilliance of director Rajkumar Santoshi.

Sanjay Dutt did alright, blending action with comedy, to play the titular character in Raj N Sippy’s Thanedaar. He would have to wait till next year before hitting superstardom with back to back hits in Saajan and Sadak.

Anil Kapoor would have drowned in flops if it wasn’t for his double bill as Kishen Kanhaiya in Rakesh Roshan’s ode to Ram Aur Shyam and Seeta Aur Geeta. Even though Sridevi’s Chaalbaaz, along the same theme, had released only a year before, audience continue to demonstrate a soft corner for twins-themed chaos. His portrayal of a cheeky albeit devoted significant other in the woman-centric family drama, Ghar Ho Toh Aisa, too, managed to rake in the moolah.

Govinda crooned ‘Filmon ke saare hero mere aage hain zero’ in Swarg. Whether that’s true or not, it certainly marked his first hit with director David Dhawan. Together the winning jodi doled out films like Raja Babu, Aankhen, Coolie No 1, Deewana Mastana, Hero No 1 and Partner.

The year 1990 contributed tremendously to the star’s numero uno stature. Her spirited performance as the spoilt and impulsive Madhu in Dil, despite her horrendous wardrobe, won her a Best Actress honour at Filmfare. She danced her way to the top spot with her rocking steps and runaway hits like Dum dumma dum (Dil), Tamma tamma (Thanedaar) and Aapko dekh ke (Kishen Kanhaiya).

Even as Sridevi rested on the laurels of previous year’s Chandni and Chaalbaaz, others like Meenakshi Seshadri (Ghar Ho Toh Aisa, Jurm) and Juhi Chawla (Pratibandh, Swarg) worked hard to stay ahead in the rat race.

On the side, Jaya Prada starred in two hits — Aaj Ka Arjun and Thanedaar.

As for the party of sex-symbols, like Kimi Katkar, Sonam and Sangeeta Bijlani, they continued to flaunt their USP as the hero’s dispensable arm candy in contrived fare.

The Khans, then only two, adorned the walls and closets of an overwhelming population of teenyboppers thanks to their chocolate hero image in romances like Qayamat Se Qayamat Tak and Maine Pyaar Kiya respectively. The troika’s third representative — Shah Rukh Khan — was still a television personality or, like they say, of Fauji fame.

Aamir Khan, now known for his one-film-at-a-time stance, featured in as many as five: Awwal Number, Deewana Mujhsa Nahin, Jawani Zindabad, Tum Mere Ho and Dil. But it’s his portrayal as Raja; a cocky college kid who elopes with his girlfriend to get married in Indra Kumar’s Dil that his fans preferred the most.

Salman Khan had only one release, Baaghi: A Rebel For Love with newcomer Nagma, an A-rated action drama set against the backdrop of prostitution. The Wanted star was credited for its story idea that made moderate profit. 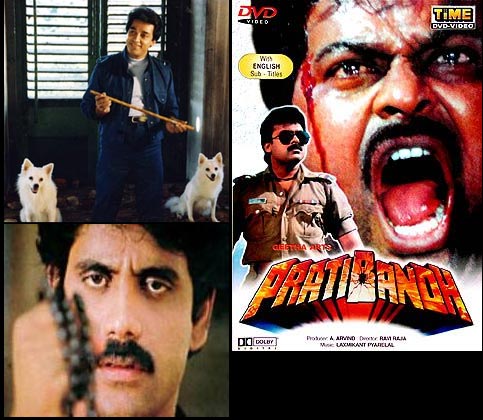 While Appu Raja, originally Apoorva Sagodharargal in Tamil directed by Singeetham Srinivasa Rao, was dubbed in Hindi and re-released in 1990 to an awe-struck audience, both Shiva (Siva in Telugu) and Pratibandh (Ankusam, again in Telugu) were remakes of their regional source.

The raw, gritty intensity of Shiva launched the career of Varma in the Hindi Film Industry while Pratibandh roared on the strength of a compelling Chiranjeevi and its creepy villain Rami Reddy as Spot Nana. 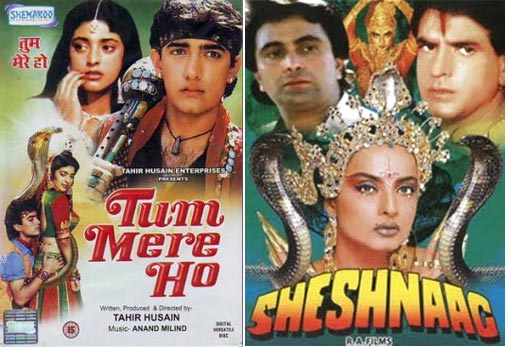 Something about 1990 attracted a whole lot of snake-themed dramas. Needless to say, they were all of the preposterous variety.

And so from Aamir Khan and Juhi Chawla in Tum Mere Ho to Jeetendra and Rekha in Sheshnaag, the A to Z of Bollywood slipped into slithery skin to hiss their way into people’s hearts. No such luck.

This music team collaborated again to make a hot-seller out of a non-starter like Bahaar Aane Tak with catchy ditties like Kaali teri choti hai and Mohabat, inayat.

Govind Nihalani examines the death of a marriage and its variable challenges through Dimple Kapadia’s vulnerable wife and Shekhar Kapur’s self-seeking husband in Drishti.

Sai Paranjype compares the psyche of immigrants who move to city as opposed to those left behind through the compelling imagery of Disha featuring powerhouse performers like Nana Patekar, Om Puri, Shabana Azmi and Raghuvir Yadav.’