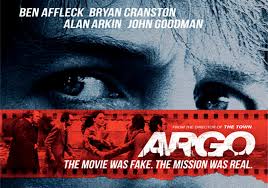 The Oscars have sometimes given me the impression of being exceedingly lenient on some films, due to bias or a number of other factors (not the least of which is smart marketing). And this year’s winner Argo fits perfectly into this category.

The story of the film, revolving around the elaborate and painstaking set-up and use of a fake Hollywood production, as a cover for a highly dangerous rescue mission in politically unstable, 1970s Iran, sounds like a superb concept on paper. Unfortunately, the transition to reel lacks the impact that one would normally expect from such a concept.

Ben Affleck is the director, co-producer and star of this film, and its clear that he can’t handle so many aspects of it. His acting is astonishingly bland and one-note; he delivers basically the same expression for most of the film’s duration, and shows negligible emotional depth, which can’t be covered up by the fact that he’s an agent (he is at least expected to be emotional in his re-union with his wife and son). Affleck’s direction is good but ordinary, boasting of none of the expertise or uniqueness that a typical Oscar film has.

In fact, the ordinariness of the film is what comes out most at you. The story ends up like a standard Hollywood thriller with over-used and now silly twists (like last-minute ticket printings or phone call pick-ups) and a decidedly unbelievable (though decently thrilling) runway chase sequence. The cinematography soundly abuses the handheld format. The score is average, becoming better as the film progresses. The small acting credit goes to the actors portraying the trapped Embassy officials in Iran, as well as their protectors; they bring out the frustration, the fear, the false outer confidence that people in such situations experience.

Overall, Argo is just a decent and mainstream Hollywood film with some degree of innovation (in its script alone). As per my views, this one didn’t even deserve to be nominated, much less win (and we all know why it won, too). Its a good one-time watch that has no lasting impact – to be seen and quickly forgotten.

Next film coming up in next post. Keep watching!